Hostile
Sharks are recurring enemies in the Crash Bandicoot series.

The first official appearance of the shark enemy is in Warped, in the levels Under Pressure, Deep Trouble, Tell No Tales and Hot Coco. Two versions of the shark can be found in the game: One is blue with a lighter belly, while the other is entirely light gray or white. The blue variant is seen in underwater levels wandering from left to right in certain areas. They can be defeated by spinning or by shooting torpedoes from the Submergible. The white variant, seen in waterski levels, swims on the surface in and aims for Coco, trying to eat her.

Sharks appear in The Wrath Of Cortex, red and much smaller than the ones in the previous game. They appear in the levels Sea Shell Shenanigans, H2 Oh No, Coral Canyon and Crash and Burn. They quickly swim from left to right. They can be defeated by a simple spin attack or, if in the submarine, by the torpedoes or mines.

The blue shark variant appears in The Huge Adventure. They look and act exactly as they did in Warped. They appear in the levels Shipwrecked, Shark Attack, Sunken City and Air Supply. They also appear as obstacles in Dingodile's boss fight.

In N-Tranced a giant gray shark chases Crash while he's riding a surfboard. It appears in the levels Lagoony Tunes, Flockful of Seagulls and Water Logged. A meter on the left side of the screen alerts the player as to how close the shark is. When the shark is close enough, it will open its jaws, trying to eat Crash. During this part the music changes to a more dramatic tune, similar to the famous tune from the movie Jaws.

A blue shark appears as a trading card in Ripto's Rampage.

A shark makes a cameo in Twinsanity, at the beginning of the level High Seas Hi-Jinks. If the player looks under the surface of the ice sheets in the snow area prior to entering the ship, one is visible frozen beneath the surface. Concept art of the shark also exists.

Sharks, in Tag Team Racing, are gray with a white belly. They appear in some Die-O-Ramas like "Sharked", "Soupy Swimmer", and "Jawed", and gags like "Shark Bait".

Sharks reappear in the N. Sane Trilogy, reprising the same roles they had in Warped.

In It's About Time, the Hazardous Wastes are home to a new variety of shark known as Sawbites. They are wildly different from previous kinds of shark, swimming through the sands of the desert and jumping up to attack the player. They are sandy brown in colour and have cybernetic parts added by their master, N. Gin. They can be seen in the levels A Real Grind and Truck Stopped. A dead Sawbite can also be seen at the beginning of Truck Stopped, hanging from a wooden frame.

Promotional artwork of a Shark in Crash Bandicoot: Warped.

A shark as it appears in the Warped strategy guidebook.

A Shark as it appears in the Japanese Warped strategy guide.

Crash Bandicoot eaten by a shark in Warped.

Coco Bandicoot eaten by a shark in Warped.

A Shark in Crash Bandicoot: The Huge Adventure.

A Shark in The Huge Adventure.

Crash eaten by a shark in N-Tranced.

Sprite of a shark from Crash Purple.

Concept art of a shark from Crash Twinsanity.

A Shark as seen in Twinsanity.

A Shark as it appears in Crash Tag Team Racing Die-O-Rama.

A Shark in the Crash Bandicoot N. Sane Trilogy. 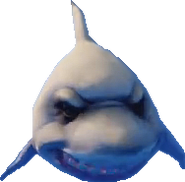 A Shark in the N. Sane Trilogy.

A Shark in the N. Sane Trilogy.

A Sawbite on the illustration on the inside of the cover of The Art of Crash Bandicoot 4: It's About Time.

Concept art of a Sawbite from It's About Time.

A dead Sawbite at the beginning of Truck Stopped.
Add a photo to this gallery