Sewer Speedway is the fourth race course in Crash Team Racing and Crash Team Racing Nitro-Fueled. It is based on the sewer-themed levels in Crash Bandicoot 2: Cortex Strikes Back. It is in the Blue Gem Cup (joining Tiger Temple, Dragon Mines and N. Gin Labs). It's also much longer than other tracks at the early stage of the game. In Adventure mode it is in N. Sanity Beach.

It starts in a little straight zone with a little jump. After this jump, there are two alternative routes, the left side makes the player go down and zigzag. In the right side, there is a speed booster which the player can use to jump right and find the same zone from the left side, or the player can jump left and make a shorter route. This route is the best selection if the player is in Time Trial mode.

Then the player enters in the sewer, which is most of the route. It has a big valley in the center, and if the player jumps, a turbo boost can be acquired. About a third of the way through, there is a hole in the wall which, if jumped through, using the half-pipe as a ramp, reveals a secret route. If the entirety of the secret route is followed it isn't much faster than the regular one, but if the player drives off the side of the path to the right after getting through the initial tunnel it makes for a decent shortcut.

If the secret route is ignored, the track goes to the left before curving back around to the right, leading into a tunnel with a hazard in the form of a rolling barrel of toxic waste. At the other end of the tunnel is more of the sewer before a jump into a big half-pipe containing another rolling barrel a short way in. The half-pipe curves right then left again, leading to two doorways that both lead back into the beginning tunnel. Follow the turn to the right to return back to the finish line. 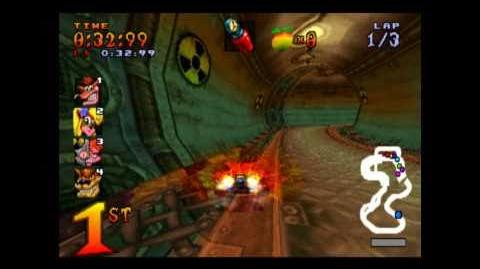 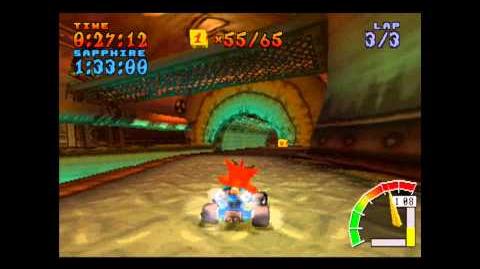 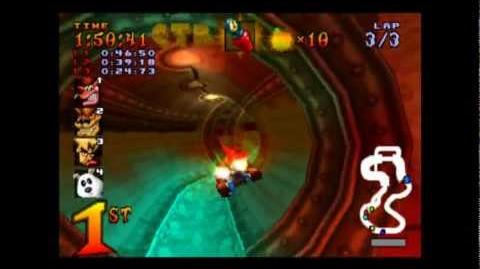