Hostile
The Sewer Mech is a type of robot that appears in the sewer levels of Crash Bandicoot 2: Cortex Strikes Back, Crash Bandicoot: The Huge Adventure and Crash Bandicoot N. Sane Trilogy, usually in the sections that have hang-rails on them. There are two types of sewer mechs: bobbing and floater.

The floater mechs have a smooth topside and spikes on their underside, and will always point towards where they move, usually back and forth on a path.

The bobbing mechs have spikes both on their underside and topside and usually float up and down while constantly pointing themselves towards Crash or Coco.

The sewer mech leaves behind a steam trail.

In Crash Bandicoot 2: Cortex Strikes Back and the Crash Bandicoot N. Sane Trilogy the floater mechs will move along Crash's path, mostly under the hang rails. The bobbing mechs can be found in the hot sewer tunnels, moving up and down. Either will immediately hurt Crash or Coco on contact and the only way to defeat them is to run into them with an Aku Aku mask or with invincibility. In Hangin' Out, in the secret portion of the level, bobbing mechs continuously loop around a path, which Crash or Coco are immune to as long as they are spinning.

In Crash Bandicoot: The Huge Adventure, they will hover back and forth to block Crash's path. Crash has to either move away from them to get around them, or if there is ground underneath the bars, drop down and advance that way. If one is above him, Crash must avoid jumping, unless he has the invincibility power up, as they cannot be defeated by any other means. 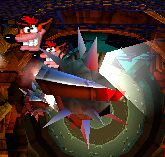 Add a photo to this gallery
Retrieved from "https://crashbandicoot.fandom.com/wiki/Sewer_Mech?oldid=181269"
Community content is available under CC-BY-SA unless otherwise noted.