Seals are common enemies that made their debut in Crash Bandicoot 2: Cortex Strikes Back. They are brown seals that are found in the arctic levels of the game. The seals don't physically attack Crash, instead they shuffle across Crash's path and act more as a roadblock.

There are certain areas in the certain levels where the seals will attack in pairs, and fall into a nearby pit before they reappear again. There are two different ways to defeat a seal. One way would be to simply jump on them, which will cause Crash to bounce in the air temporarily. Crash can also spin them away if he is near one. If Crash touches a seal while carrying an Aku Aku mask, then his mask will either be downgraded or lost. If Crash has no mask, then he will die and lose a life.

Seals also appear in the Polar Bear levels. In these levels, they only shuffle across the screen and act more as a roadblock rather than an attacking enemy. If Crash runs into them with Polar, then it will result in him dying and losing a life; however, if the player dashes through them at full speed, they will defeat the seal without losing a life. The seals also appear in Crash Team Racing on the track Polar Pass, where they appear as an obstacle on the track. If a racer bumps into a seal, then their kart will spin out and cause them to lose time.

The seals reappear in the snow levels of Crash Bandicoot: The Wrath of Cortex. In this game, the seals have a more cartoonish look and wear a propeller hat on their heads. They attack similarly to the ones in Cortex Strikes Back, except this time they will walk in and out of a cave and across the path. This means that attacking them is useless as they will keep popping out of the cave from the side of the screen. Crash can destroy them similar to the seals in Cortex Strikes Back by either jumping on them or spinning them away.

The seals that appear in Crash Bandicoot: The Huge Adventure are similar to their Cortex Strikes Back counterparts, as they mainly slide down hills to attack Crash and can be killed by either spinning or jumping them. These seals have white fur instead of brown.

A seal in Crash Bandicoot 2: Cortex Strikes Back.

A seal in Cortex Strikes Back. 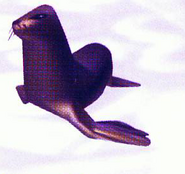 A seal in Cortex Strikes Back.

A seal in Crash Team Racing

A seal in Crash Bandicoot: The Wrath of Cortex.

A seal as seen in Wrath of Cortex.

A seal as it appears on the trading card from Crash Bandicoot Purple: Ripto's Rampage.