Seagulls are enemies in Crash Bandicoot 3: Warped, Crash Bandicoot 2: N-Tranced, and the N. Sane Trilogy remaster of the third game, and are NPCs in Crash Twinsanity. They appear near or on beaches and can damage Crash and Coco if they run into them.

In Warped and the N. Sane Trilogy, the seagull appears in the pirate levels (Coco's jet ski levels). In Crash Bandicoot 2: N-Tranced, they look similar to their Warped counterparts. In Crash Twinsanity, they appear a lot bigger and have lazy eyes and pink beaks. Sometimes they carry fish. They appear on N. Sanity Island.

In Warped, it appears on Coco's jet ski levels sitting in a box. When Coco approaches the gull, it will emit its sound of weeping and it will fly in the air. If Coco is right below the seagull, she will end the race and exit a flotation attack by spoiling her hair and pecking it, causing Coco to lose a life. If Coco opens the box on which the seagull was sitting, it will fly.

In N-Tranced, the seagulls appear on the wakeboard levels. They will fly over and if Crash hits one, he will lose an Aku Aku or a life.

In Crash Twinsanity, simply on the beach and sometimes land. It will not be damaged.

In the N. Sane Trilogy, the gulls repeat the role they played in the third game. 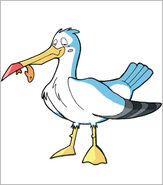 Add a photo to this gallery
Retrieved from "https://crashbandicoot.fandom.com/wiki/Seagull?oldid=173599"
Community content is available under CC-BY-SA unless otherwise noted.