Hostile
Scrubbers are enemies that appear in all three sewer levels in the games Crash Bandicoot 2: Cortex Strikes Back, Crash Bandicoot: The Huge Adventure, the N. Sane Trilogy remake of the second game, and the Nitro-Fueled remake of Crash Team Racing. Being the generic enemy in the sewer levels, they can be defeated using any attack.

The machines are generally red-brown and white in color with large eyes and an antenna coming out the top. They have an N emblazoned on their front suggesting they were made by Cortex to clean up the sewers and have brushes on the bottom to clean up messes, just like vacuums.

A scrubber from Crash Bandicoot 2: Cortex Strikes Back 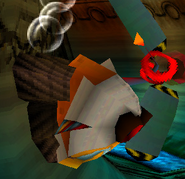 A scrubber from Cortex Strikes Back

Two cleaning machines chasing each other in The Eel Deal 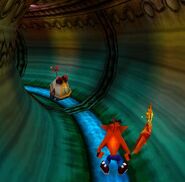 A scrubber from Crash Bandicoot: The Huge Adventure
Add a photo to this gallery

Retrieved from "https://crashbandicoot.fandom.com/wiki/Scrubber?oldid=183439"
Community content is available under CC-BY-SA unless otherwise noted.