"Stay sharp and watch out for its gargantuan arms, crushing feet, and its scorpion tail."

The Scorporilla is a huge Titan crossed between a gorilla and a scorpion, that appears in Crash Of The Titans, and Crash: Mind Over Mutant. Its first appearance is of a gorilla with a scorpion's tail and claws with red stripes running down its arms. In Crash: Mind Over Mutant, its second appearance, it is even bigger and is a purple-furred gorilla with a scorpion tail and body armor, but it's slimmer than it was in Crash Of The Titans. It lives in the Temple Colliseum near the desert and has an alliance with some Magmadons. There are also hundreds that abandoned the desert living near the Ice Prison. It says in the game that it is female referring to it as 'her' although means 'her' because it's big and strong like the concept of a ship.

Swipe - The Scorporilla will smack its hands and destroy any nearby enemies.

Tail - The Scorporilla will lean back and a glow will come from its tail. Then, it will lean forward and destroy anything nearby.

Ground and Pound - The Scorporilla will pound its fists on its chest, then bring them down to the ground creating a shock wave that will stun or destroy anything near it.

Tail Swing - This is the Scorporilla's special combo. It leans forward with one arm up, letting its tail go past, and then exchanges arms, letting the tail come through.

Scorporilla from Crash of the Titans.

Scorporilla from Crash of the Titans. 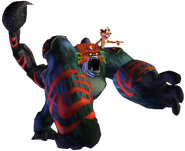 Concept art of the Scorporilla for Mind Over Mutant.
Add a photo to this gallery