The scooter is used by Coco in Crash Bandicoot: The Wrath of Cortex. It only appears on the wooden deck in Tsunami, where Coco must ride it to escape the large wave advancing behind her. Coco can maneuver the scooter left and right (by using the analog stick/directional pad), jump with it (by pressing the jump button), and accelerate (by holding the slide/kick button). She can smash wooden crates while riding the scooter, but hitting a nitro crate or a harmful obstacle/enemy will cause her to lose an Aku Aku mask or a life, as she normally would on foot.

As a typical scooter, its appearance is what's expected: a base, two wheels, and handlebars. Its design tells a different story, having blue and pink as the main colors with the wheels and handlebars pink though a few parts are blue. In the middle of the base is a blue oval with a red C: the game's strategy guide shows it was originally meant to be a pink left foot.

Concept art of Coco on the scooter in Tsunami. 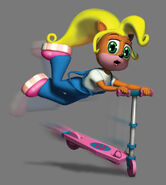 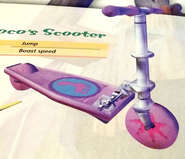 Coco's scooter from the Wrath of Cortex strategy guide.
Add a photo to this gallery
Retrieved from "https://crashbandicoot.fandom.com/wiki/Scooter?oldid=184901"
Community content is available under CC-BY-SA unless otherwise noted.