Scarabs are enemies encountered in some Ancient Egyptian-themed levels in Crash Bandicoot 3: Warped, Crash Bandicoot 2: N-Tranced, and the N. Sane Trilogy remaster of the third game. They closely resemble scarabs, which are scarabs that were molded into artifacts in Ancient Egypt. Scarabs are found only in Tomb Wader in Warped.

They also appear in Slip-N-Slidin' Sphinx, King Too Uncommon, and Wild Nile Ride in N-Tranced. The scarabs' main form of attacking is crawling back, flying back and forth across Crash's path, acting as obstacles that Crash must avoid. They can be easily defeated by simply jumping on them, body slamming on them, slide dashing them, using the Fruit Bazooka, or spinning them away. They usually appear near water pits. They crawl on the ground when the water level is going down low, but will fly into the air when the water level rises up. While they are in midair, Crash must try to avoid them while jumping. If Crash gets hit by the scarabs then they'll turn him into angel.

Scarabs reappear in Crash Twinsanity in the levels Boiler Room Doom and Cortex's section of Classroom Chaos. In Boiler Room Doom they are red, spit acid at Crash and Doctor Neo Cortex, and they can only be defeated with the Twin Slam and by being spun away. Then a purple scarab chases after Doctor Neo Cortex inside the classroom in Classroom Chaos. However, the scarabs can be blasted away with Cortex's ray gun during the chase sequences. In Crash Bandicoot Purple: Ripto's Rampage the scarab from Crash Bandicoot 2: N-Tranced appears as a trading card.

A green scarab beetle crawls around in Tomb Wader 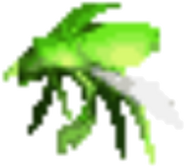 A scarab beetle and a cockroach in Twinsanity

An unused graphic of a tribesman being chased by scarabs in Twinsanity.