The Salamanders are enemies that appear in the Crash Bandicoot series.

There have been two different variants of the Salamander up to this point: a blue variant with light green stripes going down its back, and a dark pink variant. Both have green eyes.

The blue variant only appear in the level Un-Bearable, and can be seen running away from the Polar Bear along with the player. Some of them can be seen jumping, and if they get caught by the Polar Bear, they are flattened, leaving their dead body laying on the spot they died. They can be defeated by any attack.

The pink variant walks around back and forth and can also be defeated by any attack.

A Salamander in Crash Bandicoot 2: Cortex Strikes Back. 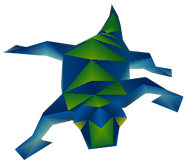 A Salamander in Cortex Strikes Back.

A Salamander in Crash Bandicoot: The Huge Adventure.

A Salamander as it appears on the trading card from Crash Bandicoot Purple: Ripto's Rampage.

Retrieved from "https://crashbandicoot.fandom.com/wiki/Salamander?oldid=186600"
Community content is available under CC-BY-SA unless otherwise noted.