Roo's Tubes (ホネホネ かいていトンネル lit. Undersea Tunnel of Bones in Japanese) is a racetrack featured on Crash Team Racing and Crash Team Racing Nitro-Fueled. It is one of the first available tracks to race on in the adventure mode. It is in the Green (as are Coco Park, Polar Pass and Cortex Castle) and Purple (as are Papu's Pyramid, Dragon Mines and Hot Air Skyway) Gem Cups. It is located on N. Sanity Beach and is the smallest race course in the game. It is the second race course in the game and Ripper Roo's home race track, where he in turn is faced in the first boss challenge.

Like Crash Cove, being one of the first tracks on the game, Roo's Tubes is very easy to win. The track essentially introduces the elements that are frequent in races: Crates lined up in rows of four, Environmental Hazards, etc. It is a basic figure-of-eight shape made of long, blue tunnels and large, rocky caverns,there also pictures of Ripper Roo on the walls of the caverns. At the end, there is a huge skeleton which racers must drive through to finish. The whole track appears to be underwater.

Early screenshot shows how this track used to look a lot greener and had different structures around the glass ceiling.

Completing this earns the green CTR token. The other greens are found in Coco Park, Polar Pass and Cortex Castle. 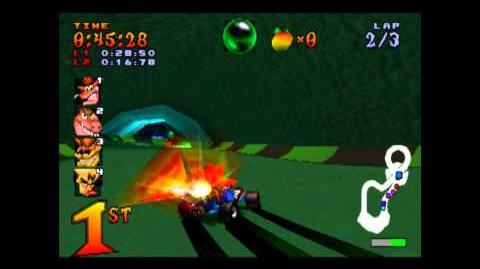 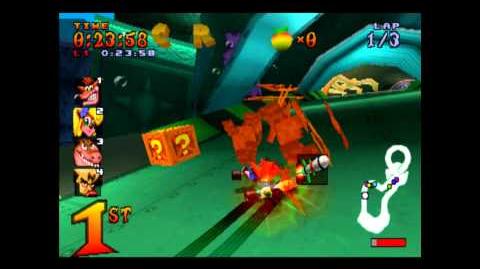 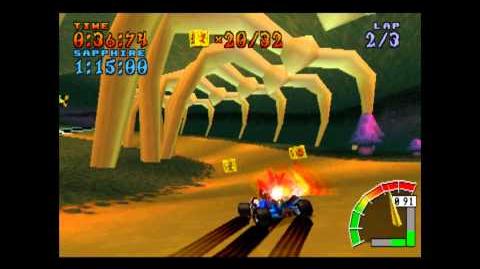 Crash doing a Ring Rally in Roo's Tubes.
Add a photo to this gallery

Retrieved from "https://crashbandicoot.fandom.com/wiki/Roo%27s_Tubes?oldid=188608"
Community content is available under CC-BY-SA unless otherwise noted.