Rocky Road is the third battle arena in Crash Team Racing and Crash Team Racing Nitro-Fueled. It is an oval-shaped arena set in a rocky desert similar to Dingo Canyon, featuring a cliff edge that circles the perimeter. A large stone balances on a precipice in the center; in Nitro-Fueled it is replaced by a silo. The cliff can be reached via ramps and bridges connected to a rocky center hill where the player is placed at the start of the battle/crystal challenge. This arena's portal is in Glacier Park, directly across from Komodo Joe's challenge. 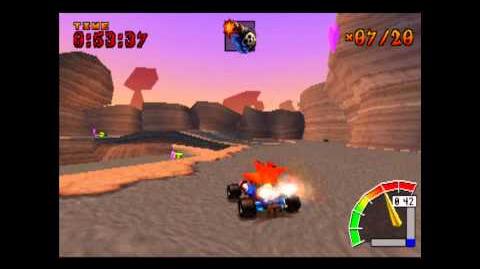