Rockslide Rumble (ゴロゴロいわでゴー！ lit. Go with the Rattling Rock in Japanese) is the thirteenth level Crash Twinsanity, and is also the first stage in the 10th Dimension and the second Humiliskate level.

The main objective is to rescue Nina Cortex from Evil Crash, who is using her as a sled down the mountainside, similar to how Crash uses Cortex as a snowboard. The Evil Crash plot is continued in Twinsanity Island and Bandicoot Pursuit.

Pitfalls are abundant in this level like all others.

There are more Nitro Crates in this level than others, but are mainly found as walls that are easily avoidable.

Since this is a humiliskate level, TNT plays the same role as Nitro Crates.

Going too fast and touching Evil Crash and Nina with hurt Crash and Cortex or cost them a life.

Ants will appear out of drills in this level, and hitting them or getting slashed by them will cost Crash and Cortex an Aku-Aku, or even a life.

Green gem: This first gem is right near the beginning of the level, inside the ants' structure.

Blue gem: Not long after the green gem, there is a section with many different slopes. You must slide up the left wall a bit to get enough airtime to make it to the left slope, then collect the gem sitting there.

Yellow gem: Not long after the first checkpoint, there's a hole to the right, barricaded with a wall of nitro crates. Slide up the right wall a bit to get over the nitros, then slide through the tunnel, collecting the gem on the way through.

Red gem: A little while after the first grinding rail, there's a hole to the right, similarly to the yellow gem. Slide up the wall a bit to get over the TNTs blocking the way and collect the gem as you slide through the tunnel.

Purple gem: Pretty much immediately after you leave the tunnel from the red gem, you must grind on the ridge in the middle of the path. The purple gem rests along the top.

Clear gem: After the purple gem, the clear gem is in a tunnel on the right, just like the yellow and red gems. Slide up the wall a bit to clear the TNTs and slide through the tunnel, grabbing the gem on the way through.

Concept art of the level. Notably, a cropped version of this artwork is used for the level's icon.
Add a photo to this gallery 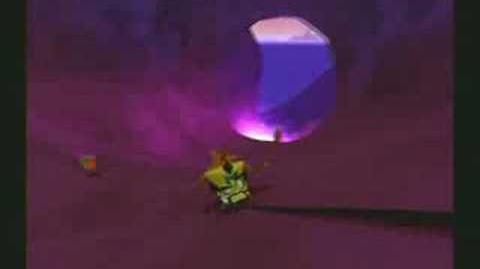 Retrieved from "https://crashbandicoot.fandom.com/wiki/Rock-Slide_Rumble?oldid=182422"
Community content is available under CC-BY-SA unless otherwise noted.