Rocket Racket is the seventh level in the game and is the second stage of the second warp room. It is the first jet pack level. Three more follow, including Doctor N. Gin's boss fight. The object is to destroy the three blimps. The blimps shoot out missiles and there are various other hazards leading up to them, as well as balloons carrying crates. There are no checkpoint crates, but the first two blimps count as ones once destroyed (except during time trial). Crash is awarded the crystal once he destroys the final blimp. This level uses a health percentage system, so Crash doesn't automatically die from an attack, rather he loses a percentage of his health. Breaking a health balloon will add 20% onto his health. 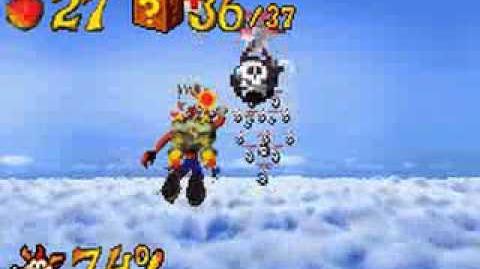