Ripto is Spyro the Dragon's arch-nemesis. He appears in Crash Bandicoot Purple: Ripto's Rampage and Spyro Orange: The Cortex Conspiracy where he teams up with Dr. Cortex in a plot to exterminate Spyro and Crash.

Ripto is a dinosaur and the antagonist of some Spyro games. He utterly despises dragons and will attempt to destroy Spyro at every opportunity. He usually sends out his lackeys, Crush and Gulp, to do his dirty work. He uses a scepter to cast evil spells, but isn't quite as good as a master dragon.

In Crash Purple: Ripto's Rampage, he teams up with Dr. Cortex to destroy their common enemies. He is the penultimate boss and then he unites with Cortex in a battle ship, which the player has one minute to destroy. After destroying the battle ship, the player beats the game. 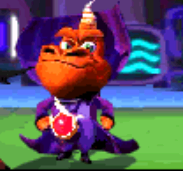 Ripto in Crash Purple
Add a photo to this gallery

Retrieved from "https://crashbandicoot.fandom.com/wiki/Ripto?oldid=184699"
Community content is available under CC-BY-SA unless otherwise noted.