Red Eye Missiles are a type of missile that has two eyes and a mouth. Their first is in Crash Nitro Kart as a weapon that is used by racers exclusively available in battle arenas. Unlike Homing Missiles, the Red Eye Missile comes with a remote control and a video monitor; like them, however, the Red Eye Missile explodes on contact and sends the player's target into a killer tumble. When juiced up after collecting the 10 Wumpa Fruits needed, the explosion of the Red Eye Missile becomes bigger, and the missile is easier to steer.

They appear again in Crash Bandicoot: On the Run! as an ingrediant used to make Inferno weapons. Here they are called Red Eyes, which are just one component of a complete Red Eye Missile.

"Fire off this super warhead to track down your enemies wherever they go! This special version of the homing missile comes with a remote control and a video monitor. Once you fire it off, you can press the fire button again to take control of it. You'll be able to see from a camera in the nose of the missile. Steer it towards your enemies using the left analog stick. If it hits a wall or a kart, it will explode, damaging anyone nearby. But remember, you can't drive around while you steer the missile, which makes your kart a sitting duck! You'll pick up this special missile in only battle mode. Juiced - The explosion from the missile is even bigger, and the missile is easier to steer."

Nitros Oxide falling and about to get hit by three Red Eye Missiles, as seen in the Loading Screen artwork of Electron Avenue. 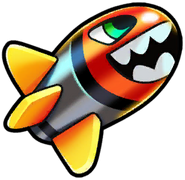