Bandipedia
Register
Don't have an account?
Sign In
Advertisement
in: Crash Mind Over Mutant, Titans, Crash of the Titans,
and 3 more
English

This mutant will freeze you solid and then shatter you into a million pieces! But on the bright side, you wouldn't feel a thing!

Ratcicle is a titan that appears in Crash of the Titans and Crash: Mind Over Mutant, most notable for its icy powers. In Crash of the Titans, N-Gin employs Ratcicles in his weapons factory as guards. They also serve Nina Cortex. In Mind Over Mutant, Ratcicle is the first titan Crash encounters. He uses its powers to defeat his sister Coco, who has gone rogue after being controlled by the NV.

A settlement on the east half of Wumpa Island, called the Ratcicle Kingdom, is inhabited by free-living Ratcicles. Their leader, Ratcicle Hero, is trapped in the Ice Prison.

Ratcicle is a blue, bipedal, rat-like titan with beady eyes, an overbite full of crowded teeth, and a distinctive grumble. Jagged stripes run across its muscular back and arms, turning white when Ratcicle is jacked in Crash of the Titans. It attacks by freezing enemies solid and raking them with its large, icy claws. It is known to freeze its surroundings to make them more suitable for itself. Young Ratcicles are scrawnier than most adults.

Cool Combo: Ratcicle swipes at an opponent with its claws up to three times in succession.

Heavy Attack: Ratcicle pounds an opponent with both fists, breaking its guard. The attack can be charged for extra damage.

Freeze Punks: Slamming its fists to the ground, Ratcicle summons a line of ice crystals that home in on and enemies and freeze them, immobilizing them for five seconds. This attack fully consumes the Titan Meter. The Ratcicle Hero has the ability to summon three lines of crystals instead of just one.

Jump Attack Combo: A combo attack exclusive to Crash: Mind Over Mutant. When a jump is combined with a light attack, Ratcicle slams its fists onto an opponent directly in front of it, similarly to a heavy attack. Any frozen titan hit with this combo will be instantly stunned.

Freeze Sneeze: Exclusive to Mind Over Mutant, Freeze Sneeze immobilizes an opponent much like a Freeze Punk does. The effect wears off after only one second, but doesn't consume any of the Titan Meter. This attack also allows Ratcicle to freeze geysers and certain patches of still water (indicated by a mist rising off of it). In PlayStation 2 and Xbox versions of the game, this attack can only be performed by using a light attack while blocking. In the Wii version, it can also be performed by flicking the nunchuk.

Ratcicle Surf: Another ability exclusive to Mind Over Mutant. Ratcicle can surf on shallow water by walking onto it. Surfable water is typically lighter in color than the water surrounding it.

Concept art of the Ratcicle.

Promotional trading card of the Ratcicle for Crash of the Titans.

A Ratcicle in Crash: Mind Over Mutant.

Crash on a Ratcicle in Crash: Mind Over Mutant. 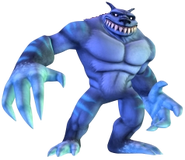