Rampage Ruins is the second battle arena in Crash Team Racing as well as Crash Team Racing Nitro-Fueled and is located in The Lost Ruins, close to the door to Glacier Park. It is a large arena with elevated areas around most of the sides. It is themed after Wumpa Island's ancient ruins, as well as the race track Papu's Pyramid. The arena features a sheltered area that can be reached by a ground opening and a hole in the ground above. This, as well as many ramps and corners, can determine the effectiveness of many weapons, and provide ways to destroy missiles before they hit the player. The arena displays many pylons and an uneven ground surface to suggest the area has been abandoned. 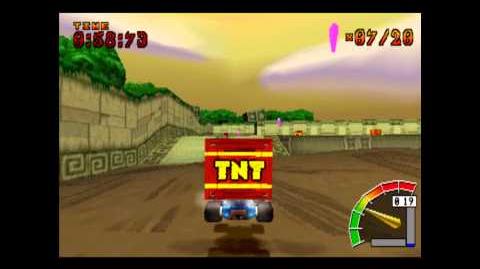