View source
watch 01:54
Arcane: League of Legends - The Loop
Do you like this video?
Play Sound

Oh dear, I hope you and Spyro have what it takes to stop those two.

The Professor is a genius mole scientist, originally from the Spyro the Dragon series, appearing in the Crash series in the crossover title Crash Bandicoot Purple: Ripto's Rampage.

In Purple, the Professor helps fellow genius Coco find out Cortex and Ripto's whereabouts in so that Crash and Spyro can defeat them.

Later in the story, Nina kidnaps the Professor and Coco and destroys their research under Cortex's orders. Spyro and Crash go to the castle where they are being held, and Crash distracts Nina while Spyro frees Coco and Professor from their cages. After the fight, the Professor tells Spyro that he and Crash must return to collecting Crystals before the villains can take them.

Later still, Spyro puts a tracker on Cortex after fighting him, allowing the heroes to find their base. The Professor points out that the base is too far away for them to currently reach, meaning that Crash and Spyro must collect 20 clear Gems for the portal to be powerful enough to reach it.

The Professor's last appearance is in the final cutscene, congratulating Spyro and Crash for defeating Cortex and Ripto.

True to his name, the Professor is a highly intelligent individual, constantly researching and running experiments. In the Spyro the Dragon series, the Professor usually gets Spyro to run errands for him and his research, offering Orbs in return.

The professor is a short, elderly, light brown mole. He's balding with white hair around the sides of his head and thick eyebrows. He has a large black nose, small dark eyes and rounded ears. He wears large, thick spectacles, a white lab coat and black shoes. He is almost always seen holding a clipboard and a yellow pencil.

The Spyro Wiki's page on Professor. 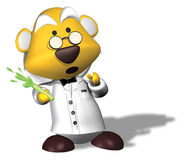 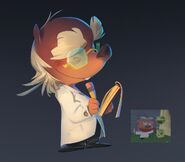 Concept art for the Professor in the Reignited Trilogy.