Power Gems are special collectible Gems from Crash Tag Team Racing and Crash Bandicoot: On the Run!. They are directly used for story progression.

In Tag Team Racing, Power Gems are purple gem stones with a yellow cap on the top and bottom. They are used to power the machines that activate the gateways to each of Von Clutch's Motor World's lands and so progress the story. To obtain a Power Gem, Crash needs to use Power Crystals to unlock the jump pads that lead to an area containing it..

The first power gem in the game is found on the Midway, after Crash rides an elevator down to the Midway, resting over the hand of the statue of Von Clutch. This power gem unlocks Mystery Island.

The jump pad to access the power gem is located next to Neo Cortex, and requires eight power crystals to activate. The gem lies on a trap pedestal, which will trigger if the pressure on it is relieved. Crash retrieves the gem by quickly replacing the gem with an equally-heavy bag of sand reminiscent of the scene in Indiana Jones and the Raiders of the Lost Ark. This power gem unlocks Happily Ever Faster.

The jump pad to access the power gem is located next to two Park Drones, near the entrance to Evilocity and requires ten power crystals to activate. The gem is held by a Park Drone dressed as Rapunzel, who gets pushed off the castle tower prop by Crash, who takes the gem back. It unlocks Tyrannosaurus Wrecks.

The fourth power gem is located inside the volcano, near the battle arena entrance. The power gem is inaccessible, until a cow that was catapulted when Crash first enters Tyrannosaurus Wrecks falls inside the volcano and hangs between two ledges, bridging the gap. Crash walks over the cow to grab the gem and get back, before the cow falls down into the volcano. This power gem unlocks Tomb Town.

The final power gem is stuck inside a sphinx's nose, located deep inside the tomb. To retrieve it, Crash presses a button which causes a slight earthquake and makes the power gem fall off. This power gem unlocks Astro Land.

In On the Run, Power Gems are clear gem stones with a yellow cap on the top and bottom. They are earned by defeating a Henchman or a Boss. They unlock new Portal Weapons blueprints, new repairs and upgrades in Coco's Base, new gangs to fight, new levels and new challenges. 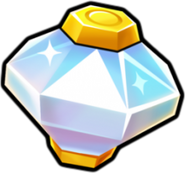