Potions are recurring items that go by many names in the Crash Bandicoot series. They are commonly used by Nitrus Brio.

N. Brio's beakers first appear in Crash Bandicoot. They are used by N. Brio in his boss fight. When he throws the green ones, they turn into enemies known as blobs. Jumping on these will defeat them and also remove a portion of Brio's health. He also throws red potions which explode (in the N. Sane Trilogy, the red potions have been changed to purple). Later in the fight, he drinks his own potions, turning him into a monstrous version of himself.

Purple vials also act as the main weapon of the Lab Assistants in the levels Slippery Climb, The Lab and Stormy Ascent. Blobs also appear in The Lab.

A weapon called "N. Brio's beaker" appears in Crash Team Racing. When it is not juiced up, it appears green. When an unsuspecting driver hits it, it makes them briefly spin out of control. When juiced up, it appears red and will inflict one of three effects, chosen randomly. The victim may have their item wheel randomized, have their wheels become slippery or simply slow down for a period of time. Other nearby explosions, such as TNT or nitro explosions, set it off too. Beakers are dropped behind the racer by default, but can be launched forward by holding

. Papu Papu and Nitros Oxide use both kinds of beakers in their boss races.

In the sequel, Crash Nitro Kart, these were replaced by Static Orbs and Ice Mines, which serve as similar weapons.

In Crash Twinsanity, Brio's beaker returns. After being blown off N. Gin's ship, a boss fight begins against N. Tropy and N. Brio on a small iceberg. Here, N. Brio downs a potion from one of his beakers to transform into a new, frog-like monster, chasing Crash around the iceberg before returning to the water for N. Tropy's phases of the fight.

Nitroglycerin is an On-Demand Item that Crash can collect. When its icon is tapped on the touch screen, it creates a shock wave around Crash that damages enemies.

In Crash: Mind Over Mutant, Brio refers to it as "mutagen" and it can now reverse an unintentional transformation. Neo Cortex uses one of N. Brio's potions to transform into a titan, describing it as a mutation formula tasting "like peppermint barf".

N. Brio's beakers return in the game Crash Team Racing Nitro-Fueled. Unlike before, the juiced up version of the beaker has the same effect every time: causing a racer to spin out, rerolling their weapon (if they have one) and creating a storm cloud above their head, slowing them down for eight seconds.

N. Brio's potions are stated to have brought the inhabitants of Tranquility Falls to life, making them hostile. In Give It a Spin/Potion Commotion, he attempts to attack the player character with one, but is stopped by Tawna. It instead lands on a locked door which opens up the rest of the level.

Potions are also used during N. Brio's boss fight in Trouble Brewing, similarly to how they were used in the first game. The purple ones create shock waves for the player to jump over, while the green ones spawn in enemy blobs. Midway through the fight, he smashes them together, creating a visual filter like the ones seen in N. Verted Mode. For the final phases he drinks them both to transform himself.

Potions in this game (known as serums) are a type of Portal Weapon used to defeat bosses. They are unlocked with Power Gems and can be crafted at Coco's Base using specific ingredients. The ingredients used determine which type of serum is created.

button, or launch it out in front of your kart by pushing UP on the Directional Button or Left Stick while pushing the

button. The next kart that hits it (including you) gets blown into a spinout. Other explosions can cause it to go off too. Juiced Up - (Red) Now the beaker is Poison! After the spin out, it will rain on your parade as one of four unique poisons take hold of your kart for a few seconds!" 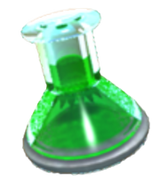 Nitroglycerin from Crash of the Titans for the Nintendo DS

Dr. N. Brio with a beaker in Mind Over Mutant 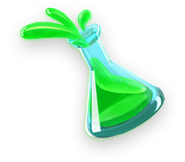 Beaker in On the Run!

N. Brio with his beakers in It's About Time

N. Brio holding a beaker on the illustration on the inside of the cover of The Art of Crash Bandicoot 4: It's About Time