View source
watch 02:17
New Pokemon Games - The Loop
Do you like this video?
Play Sound

The Post-Grand Prix is the final update to Crash Team Racing Nitro-Fueled bringing new content after the end of the last Grand Prix. It was released on March 26th, 2020.

The main theme of this update is the game's developers themselves, Beenox, including character skins and kart elements in their colors.

This update comes with free content for all players in Beenox's colors:

In addition to these new content, Crunch Bandicoot and Geary are now unlocked for all players by default.

Each track received a new time corresponding to the best performances of Beenox's developers on them. Beating them unlocks a new set of Legendary wheels named Master.

A Beenox Crate similar to the game's opening sequence's was added to each track with the exception of Retro Stadium. Finding and breaking each by driving on them unlocks the new Iron Checkpoint Crate character. This can be done in any game mode.

Three new Legendary paint jobs were added as rewards for beating all the Cup Races on each difficulty: Trophy Bronze for Easy and higher, Trophy Silver for Normal and higher, and Trophy Gold for Hard. They have a reflective metal shine to them, similar to the Relic paint jobs.

Specific items are now prioritized in the first daily rotation of the Pit Stop during one or two week-long events advertised on the game's official Twitter and Facebook channels. This also includes new bundles of kart sets limited to these events. These events include:

With the Post-Grand Prix update, remaining content from all previous Grand Prix were added back in the Pit Stop. New kart sets, decals, characters skins were also introduced as well as new color variations of Legendary character skins.

Note that Fixed Rilla Roo is unlocked for all who previously purchased Rilla Roo during the Winter Festival. This however may be bugged to several players, with the new character model remaining locked in the Pit Stop regardless if they already owned him or not.

Like for previous Grand Prix, a Last Chance pack for the last Grand Prix was available for the duration of the first weekend following the update's launch.

Character bundles only appear for 1 or 2 weeks throughout the month. They contain a few items that have already been released, sold together at a discount.

The Neon Hawk and Nitro GT kart sets are permanent addition to the Pit Stop. The Hit the Road kart set was limited to a mini-event in May 2020.

The May Pit Stop highlights. 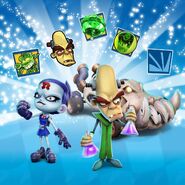 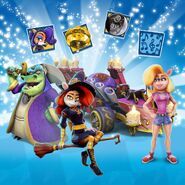 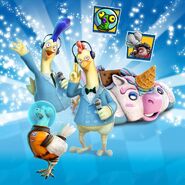 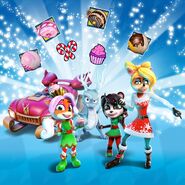 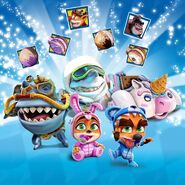 Concept art of the Nitro GT.

Concept art of The Cog.