Start a Wiki
watch 02:27
The Loop (Games)
Do you like this video?
Better image needed
An image on this page has quality issues that need to be rectified. Please help the Crash Bandicoot Wiki by editing or replacing it with a better version.

The police car is a vehicle seen in the motorcycle levels of Crash Bandicoot 3: Warped and the N. Sane Trilogy. The police cars will drive against Crash in Area 51? as he races UFOs. In the other levels, the police cars serve as obstacles, usually standing in one of the sides of the streets, but with some going back and forth.

The police car in Hog Ride. 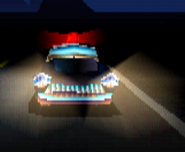 A police car in the N Sane Trilogy version of Hog Ride.

A police car in the N Sane Trilogy version of Area 51?.
Add a photo to this gallery

Retrieved from "https://crashbandicoot.fandom.com/wiki/Police_car?oldid=189113"
Community content is available under CC-BY-SA unless otherwise noted.