Polar Pass is the eleventh race course in Crash Team Racing and Crash Team Racing Nitro-Fueled. Like the race track Blizzard Bluff and the battle arena The North Bowl, it is based on the snow-themed levels of Crash Bandicoot 2: Cortex Strikes Back. It is Polar's home track.

It is featured as the first race track in the Crash Cup in the arcade and the Green Gem Cup alongside Roo's Tubes, Coco Park and Cortex Castle.

Based on Polar's levels in Cortex Strikes Back, this frozen wonderland is full of totem poles, icy water and great walls of ice. In Nitro-Fueled this track is home to a fishing village of Polar Bears, with cabins and fishing equipment constructed by the icy water.

The track begins with a brief straight section, with a single seal going back and forth across it to spin out any racers that collide with it. The track then goes left before forking and interlacing into a double-helix like pattern. After that is a boost pad before the track begins to go uphill, encountering another seal before curving to the left. The track goes downhill over bumps with a boost pad to the left, before reaching another boost pad at the end before jumping off onto an iceberg.

The trail hops across two small icebergs, each with a boost pad on them, before turning to the right on a horseshoe-shaped iceberg, hopping across two more small icebergs, leading onto a thin path of ice with wooden ramps on it before going into a cave. Alternatively, with sacred fire, after hopping onto the first small iceberg, players can hop across the gap to the path on the other side, cutting the corner. If carrying blue fire, players can jump to the other side while skipping the two icebergs entirely, though this is much more difficult.

After entering the cave, the track slopes uphill to the left. Two seals go back and forth by the end of the cave. With enough speed, players can easily jump the wall ahead and continue to the left, but if they are going too slow or are hit by a seal, they must go around the wall to the right before continuing leftwards. The course continues forth across a few frozen ponds before a massive leap back down to the finish line below. 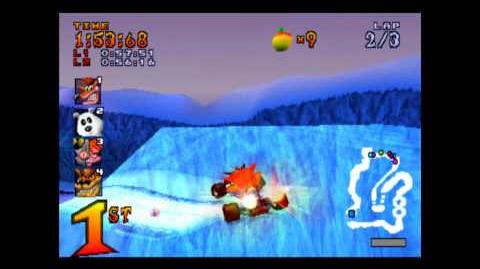 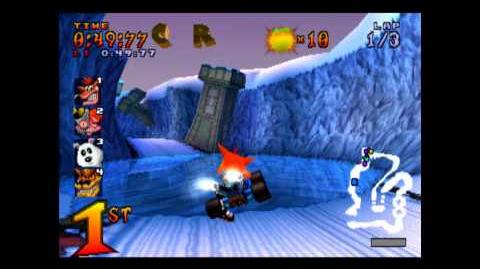 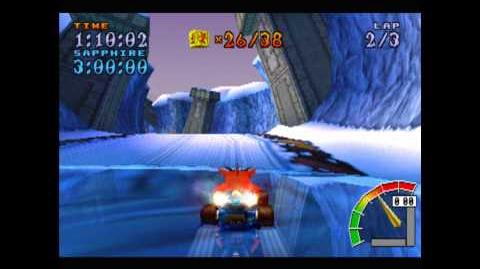