Polar Panic is the first Polar Push arena and the second level of the first warp room to complete on adventure mode in Crash Bash. The object of the game is to push the opposing players off the ice and into the water. The characters ride on polar bear cubs. If two or more players, or members of both teams are still on the ice after 1 minute and 30 seconds, it's a tie. In this level, there are ice blocks surrounding the arena. They need to be knocked off before anyone can fall off.

The background is normally a starry night sky, with an aurora in the upper middle of the screen. During the crystal challenge, however, it is a morning sky. Power ups and can be obtained from a robot that uses a beam every 15 seconds. Walking under the robot's beam can either grow the player, shrink the player, or give the player the lightning or the weight. Each of the characters can use a special push move that uses energy that gradually regenerates. Crash, Coco, Dingodile and Rilla Roo use small pushes that use some energy, whereas Cortex, N. Brio, Tiny and Koala Kong have much larger pushes which use almost all of their energy. 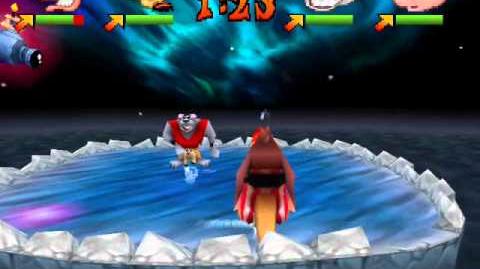 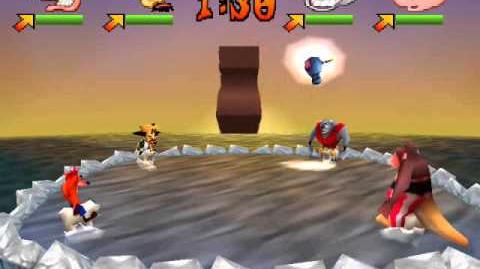