They are blue, muscular mutant rhinos. They have brown eyes and a white horn on their snouts, their right feet having two white toenails while the left is a silver peg leg. Their outfits consist of a white bandana, a red tank top with N. Gin's jolly roger logo, red studded wristbands, a yellow cloth belt and black trousers.

The first and most common variety of Pirate Rhino is the Swinging Rhino. Four of these are seen at the beginning of High Seas Hi-Jinks, swinging back and forth over the path on ropes attempting to hit Crash and knock him off into the nearby pits. They cannot be defeated, and must be simply avoided.

This Pirate Rhino stands at the top of a large bumpy slope, throwing barrels down it to hit Crash a la Donkey Kong. The barrels must be dodged by hiding behind the bumps and moving once the barrel goes by, allowing you to reach the pirate. They can then be defeated with a simple spin attack. There is only one Barrel Throwing Rhino, in the second room of High Seas Hi-Jinks.

This cut Rhino variation would have been armed with a cutlass. If hacked into the game, they will stand still in one spot, lashing out at Crash if he gets too close.

This is the most mysterious variety of Pirate Rhino, with only a single piece of concept art proving their existence. They would have had a large cannon attached to their backs, which would have presumably been fired at Crash as an attack. 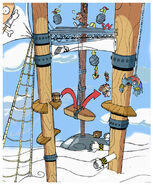 Concept art of a Pirate Rhino in an early version of High Seas Hi-Jinks.

Concept art of a Rhino mopping the deck of N. Gin's battleship.

Concept art featuring models of the Knife Fighter and a sketch of the Shooter.
Add a photo to this gallery

Retrieved from "https://crashbandicoot.fandom.com/wiki/Pirate_Rhino?oldid=192032"
Community content is available under CC-BY-SA unless otherwise noted.