A Pirate Platypus was going to be an enemy in Crash Twinsanity working on N. Gin’s battleship. The platypus was going to fire cannonballs at Crash until he could spin the cannon around. Like Rusty Walrus and the removed snake pirate, it was one of the non-rhino crew members of the battleship. As seen on the pictures, it likes to handle explosives such as TNT and bombs.

A Pirate Platypus in action operating cannons can be seen in footage of a prototype version of the game posted by Gamehut in August 2018. 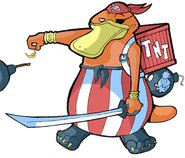 Add a photo to this gallery
Retrieved from "https://crashbandicoot.fandom.com/wiki/Pirate_Platypus?oldid=175849"
Community content is available under CC-BY-SA unless otherwise noted.