Spin
Penguins have appeared as enemies many times in the Crash Bandicoot series.

They are minor enemies in the snow/ice levels (Snow Go, Snow Biz and Cold Hard Crash). Here, they are one of three typical snow enemies, including porcupines and seals. Some penguins will walk back and forth, spin, get dizzy, and repeat the process. Others will slide down at Crash while he is walking forward. They can be defeated by any attack while not spinning.

They appear in the levels Arctic Antics, Eskimo Roll and Avalanche. They have the same role as the ones in Cortex Strikes Back: walk back and forth, spin, and repeat the process. In the level Eskimo Roll, Crash can run over them with the atlasphere.

They would have appeared as enemies in Arctic Cliffs, spinning and stopping like penguins did in the previous games. They also appear on a trading card.

Penguins in this game can be found in the Iceberg Lab and its associated levels. They have jet packs that they use to home in on Crash from above, or charge at him directly. At the end of their attack, whether they hit or missed their target, they will explode.

They are employed by Cortex. During the level Ice Climb, a group of penguins confront him, apparently because their paychecks bounced. He tries to appease them by offering them fish, but ends up shooting one with his ray gun instead. The rest of the penguins fly off.

They reappear in Slip Slide Icecapades to chase Crash and Cortex, and are seen again in Classroom Chaos as props inside glass display cases.

Crash Tag Team Racing, unlike other games, have their own kind of penguin, known as Ninja Penguins. The Bowling minigames also feature penguin bowling pins.

Penguins reappear in the N. Sane Trilogy, reprising their role from Cortex Strikes Back and Warped.

Penguins appear as background decorations in the course Blizzard Bluff, where they can be seeing ice-skating, skiing and enjoying the snowy weather. Penguins can also be found having a dance party on the top of a cliff in the course Polar Pass. As the game is a remake of the original CTR, Penta Penguin is once again playable.

In It's About Time, rather than being enemies as in previous games, penguins serve more as background decorations. They can be found in the snowy 11th dimension, in the levels Snow Way Out, Stay Frosty, Bears Repeating and Building Bridges. They sit on the edge of water pools, sometimes in groups, and jump off into the water if approached.

In On the Run!, Penguins appear throughout the level Snow Go, spinning on the spot before getting dizzy and stopping as the player approaches. They are like more tools than enemies, as they are usually positioned in such a way that spinning or sliding them will send them flying into TNT or Nitro crates, detonating them and clearing the way or breaking item crates. In any case, they will still harm the player if they come into contact without attacking.

A penguin in Crash Bandicoot 2: Cortex Strikes Back.

A penguin spinning in Cortex Strikes Back.

A penguin walking around in Cortex Strikes Back. 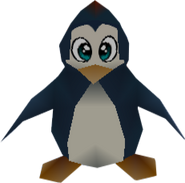 Penguins featured in artwork used on the Japanese box art. 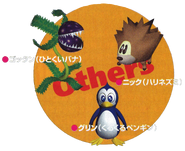 Japanese promo render of a penguin among other enemies. 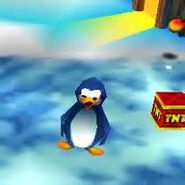 A penguin in Crash Bash.

A penguin in Crash Bash.

A penguin in Crash Bandicoot: The Wrath of Cortex.

A penguin not being persuaded by Cortex's offer of fish.

The penguins chasing Crash and Cortex down the mountain.

Concept art of penguins in the Slip Slide Icecapades level of Crash Twinsanity.

A group of penguins seen in the upper background.