Papu's Pyramid is the home track of Papu Papu and the seventh race course in Crash Team Racing and Crash Team Racing Nitro-Fueled. It and the battle arena, Rampage Ruins, are based on the levels The Lost City and Sunset Vista (from Crash Bandicoot) as the faces on the side of the walls are the same as the ones on these levels.

It is also where Papu Papu is raced against in the game. It is in the Red (as well as Crash Cove, Mystery Caves, and Blizzard Bluff) and Purple (as well as Roo's Tubes, Dragon Mines, and Hot Air Skyway) Gem Cups. It is also in the Nitro Cup grand prix (as well as Mystery Caves, Cortex Castle, and Tiny Arena). Scattered throughout the course are man-eating plants which devour racers that get too close.

This track takes place on and around a massive pyramid temple in the jungle, built in Papu Papu's honour. The track is built from great golden stone, with carvings of Papu Papu's face found on some walls. Giant man-eating plants act as hazards, and there are a few points at which racers may fall off the track if not careful.

The track begins with an immediate uphill turn to the right, leading racers to the great spiral. The spiral consists of three right-angle turns to the left, bringing racers up and around the pyramid itself. After the spiral is a curve to the left with three man-eating plants along the way. Alternatively, racers can turn sharply to the left and cut across the grass. Next is a gentle turn right then a curve to the left which lead down some big steps. Alternatively there is a shortcut where, instead of turning right, racers jump off the edge to the left onto a column, then down to the track below, cutting the corner.

Racers can then either proceed forth down the steps towards two more plants under the bridge, or jump onto the ledge on the left over the bridge for a small shortcut. After this is a right turn uphill, where there is a big right curve with one more plant before descending downhill rightward to the finish line. Alternatively, there is one final shortcut: jumping off the right side of the track when heading up the hill, cutting the curve and avoiding the plant entirely. 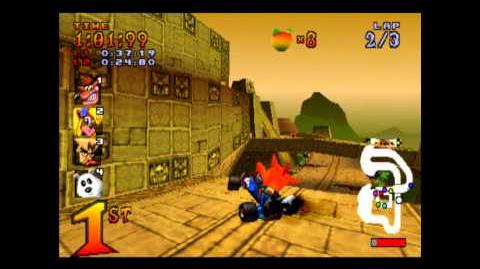 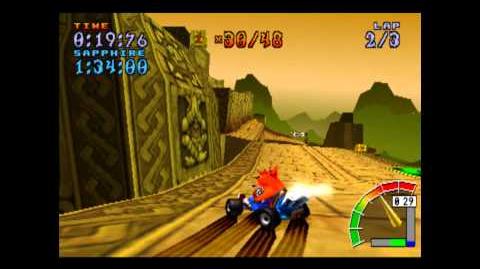 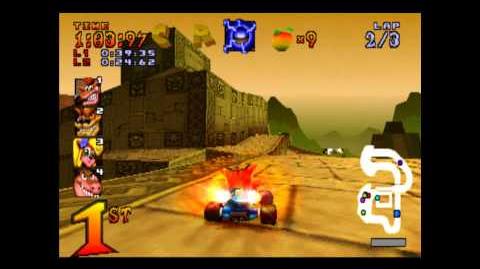 Crash and Tiny in Papu's Pyramid 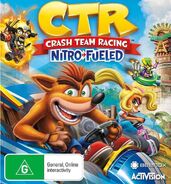 A man-eating plant teaching students how to eat racers.