Start a Wiki
watch 02:38
The Loop (Games)
Do you like this video?
Nominated for deletion
If you disagree with this page's deletion, participate in the page discussion. If this page obviously should not be deleted or you intend to fix it, please remove this notice, but do not remove this notice from articles that you have created yourself.
The POW Crate is a cut crate from Crash Bandicoot. Similar to a TNT crate, this crate would break immediately when spun and enter a countdown when jumped on. When broken, it would explode into several blue and red explosions which would break the surrounding crates but were otherwise harmless. This crate was only found in three levels in an early version of the game. A few of the POW crates were replaced with TNT crates in the final version, but many POW crates were also simply just simply removed.

The crate might have been cut from the final game due to similarities to the "POW block" from the Super Mario series, along with its lack of usefulness in general.

It looks like a basic crate with a blue stripe on the top and bottom with the word "POW" written in yellow with a blue border on its sides. Earlier versions of the crate had red stripes and outlines instead of blue. Breaking it will cause red and blue explosions that will only break nearby crates.

The crate appeared in the following levels:

A close-up of a POW crate 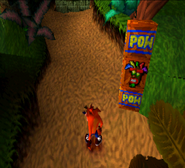 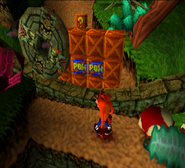 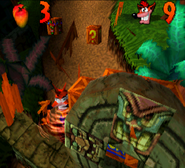 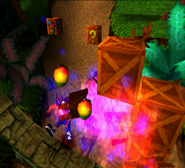 Add a photo to this gallery
Retrieved from "https://crashbandicoot.fandom.com/wiki/POW_Crate?oldid=205455"
Community content is available under CC-BY-SA unless otherwise noted.