Oxide Station is the sixteenth and final race course in Crash Team Racing and Crash Team Racing Nitro-Fueled. It's the track where the boss race against Nitros Oxide takes place, as it is his home track. This is also the final race in the Yellow Gem Cup and the second longest track in the game.

In the original Crash Team Racing, this track is unavailable for multiplayer races but can be raced on in the arcade mode. This is because it is too large and would cause major lag problems when appearing three or four times on a split screen on the PlayStation 1. In Crash Team Racing Nitro-Fueled, it is now playable in multiplayer races. The track is also featured in both the Lost Cup and the Space Cup in Nitro-Fueled.

The track takes place within Nitros Oxide's massive space station floating in the vacuum of space, filled with alien technology, insane twists and jumps and a sickly green glow. In the Nitro-Fueled version, the station is situated on top of an asteroid, with green pipes extracting liquid nitro from the astroid's core. A unique feature of this track is its crates - rather than having four item crates in a row like other courses, it has three item crates with one fruit crate.

The track begins with an immediate slope to the right, with a boost pad on the inner curve to the right. After a brief straight, the track does a large spiral curve to the left, swerving downwards in a loop with three more boost pads along the way. At the end of the loop, the track proceeds forward, with another boost pad before a gentle turn to the right. There is a S curve next as the track quickly goes right, then left, then right again, before straightening out to meet a ramp with a boost pad on it, sending racers to the next section of track.

After a boost pad at the bottom of the jump, the track continues to swerve, going gently right, then left, then straight up a large ramp, with two more boost pads along the way. At the top of the ramp is a large jump, bringing racers down to a small section of road with a rightwards curve. This curve leads to the biggest jump of the track, sending racers flying through the vacuum of open space. This ramp grants blue fire in Nitro-Fueled. At the end of this leap is another rightwards curve before a large drop down to the next section of track below.

The track briefly ascends uphill, with a boost pad before gently turning right. Next are three more boost pads before a sharp right turn, briefly going straight before curving to the left with two boost pads. Next is another sharp right turn, leading to a straight with a boost pad on the left before turning right, then quickly turning left with another boost pad. There are two final boost pads as the track swerves right, then left, leading back to the finish line. 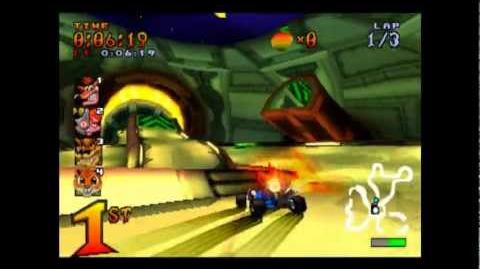 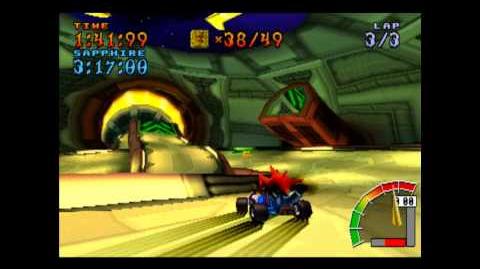 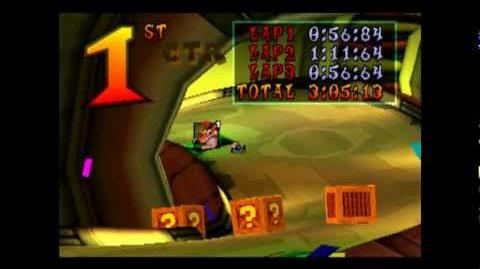