Outline Crates are crates that appear only as semi-transparent ghostly outlines until they are activated by an ! crate. Outline crates are intangible but may still be affected by crate physics and can interact with other crates. The actual content of a ghost crate is unknown until it is activated, upon which it can turn into a set crate of any variety. Since a single ! crate can activate multiple ghost crates, outline crates may be activated in a certain order. In Crash Bandicoot: The Wrath of Cortex, Crash Bandicoot: The Huge Adventure and Crash Bandicoot 2: N-Tranced, the whole set of ghost crates is activated at the same time in no particular order.

"These strange boxes appear only if the Switch Box hidden in that level is activated."

"The contents of these strange boxes only appear if the Switch Box hidden in that level is activated."

"This crate is only visible as outlines until you activate a nearby iron-switch crate. Once triggered, the outline crates will become solid, allowing you to stand or walk on them." 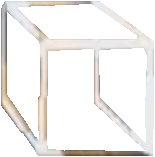 An Outline Crate from Crash Bandicoot. 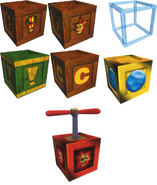 An Outline Crate from the Crash Bandicoot: N. Sane Trilogy. 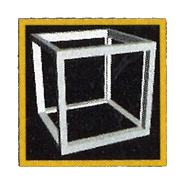