Clockwork Wumpa
Out of Time is the seventh race course in Crash Nitro Kart. It also has a remade version in Crash Team Racing Nitro-Fueled.

The track is part of the Fenomena world, taking place in a desert filled with clocks and clock parts. Fenomena's champion, Norm, is faced on this track.

Since this track is used for their boss race, it can be considered both Small Norm and Big Norm's home track. It is used in the Uka Cup and the Green Gem Cup (along with Jungle Boogie and Deep Sea Driving). In Nitro-Fueled, it is also a part of the Desert Cup.

It is a desert-themed track that features a massive clock face in the middle of it. There is a massive sand pit at start and there are spring boosts rising up and down. Players must get onto one before it goes down to get across the sand pit. About halfway, players will drive across the big clock. In the original Crash Nitro Kart version, along the sides of the race track, giant sand worms pop up out of holes in the sand and eat up racers who get too close. Just before the finish line, there is a massive jump. If racers jump too high then they will hit a moving windmill.

In Crash Team Racing: Nitro-Fueled, the giant clock face is redesigned as a castle-theme clock tower that players drive through due to the original game lacking the anti-gravity mechanics of its successor. The sand worms are also absent.

Oxide encountering a worm in CNK

Pura in anti-gravity, driving on the clock face in CNK

As seen in the box art. 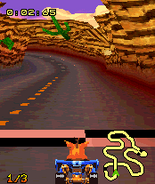 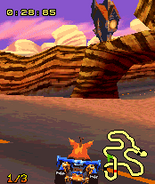 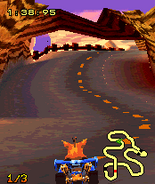 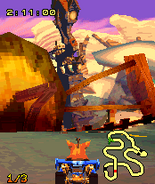 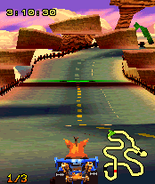 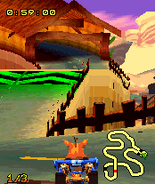 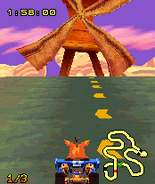 The track in Crash Team Racing: Nitro-Fueled, with its anti-gravity clock being replaced with a clock castle

N. Tropy racing on Out of Time in Nitro-Fueled