No-Fly Zone is the eighteenth stage and the third level in the fourth warp room in Crash Bandicoot: The Huge Adventure for the Game Boy Advance. It is the third and last jetpack/shooting-themed level in the game.

The level contains only one gem, and the time trial in the level is known to be one of the trickiest time trials in the game. It also features the background of the boss fight for N. Gin.

The object is to destroy the three blimps. They shoot out missiles and there are various other hazards leading up to them, as well as balloons carrying crates. There are no checkpoint crates, but the first two blimps count as checkpoints once destroyed (except during time trial). Crash is awarded the crystal once he destroys the final blimp. This level uses a health percentage system, so Crash doesn't automatically die from an attack, rather he loses a percentage of his health. Breaking a health balloon will add 20% onto Crash's health (except it can never go above 100%). 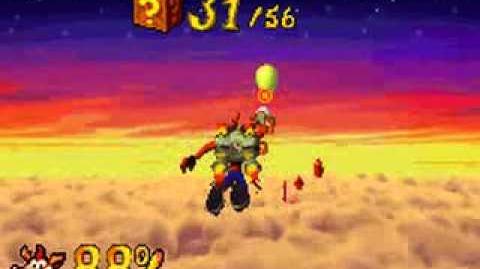