Oxide is the last boss and is fought in Oxide's Space Station. He will use beakers, TNT crates, Nitro crates, and bombs to slow players down. Unlike other bosses, Oxide cheats by starting before the countdown is completed, and will spin out when taking damage from any weapon, even if it normally knocks karts over. When Oxide is defeated, he will agree to leave Earth in its current state, but refuses to acknowledge the player as the fastest in the galaxy unless they collect all of his time Relics. When the player defeats Oxide with all of the Relics, he finally admits defeat and returns to Gasmoxia as the credits roll with epilogue messages for all the characters.

Hint: There is a shortcut where there is a gap in the railing. Use this to get ahead.

Oxide Ride is the final boss fight in Crash Bash, and it's against Nitros Oxide. To enter this boss fight, the player must have at least 22 trophies, 15 gems, and 12 crystals.

The battle has two phases. The first phase is a chase with Nitros Oxide. The second phase is Ballistix based, with Oxide as the only opponent.

In the first phase of the battle, the player must chase Oxide through an asteroid field similar to the final boss fight in Crash Bandicoot 2: Cortex Srikes Back. The player must dodge several hazards including asteroids, nitro crates, iron fences and Oxide's missiles. As the player fails this phase, the obstacles deal less damage.

In this phase, the player must beat Oxide at a Ballistix based game. If an iron ball passes through the player's or Oxide's goal, they will lose health. Occasionally, missiles will be fired from two cannons next to Oxide's goal. These will also make the player lose health. There are also red balls which will instantly kill the player if they touch it. These red balls also appear in the crystal challenge of Sky Balls. As the player loses the challenge, the damage Oxide takes by balls is increased and his speed is reduced.

In Crash Team Racing: Nitro-Fueled, defeating Oxide will unlock him as a playable character, and completing Adventure Mode 100% will unlock his Hovercraft as a playable kart body (both are unlocked from the start in the Nitros Oxide Edition of the game).

Nitros Oxide's boss fight is the same as in the original Crash Team Racing. Upon winning all 16 trophies and defeating Pinstripe to obtain the last Boss Key, the player is transported in front of Oxide's spaceship in Gem Stone Valley. Oxide flies out of his spaceship in his Hovercraft, and challenges the player to prove who the fastest driver really is.

Upon defeating Oxide the first time, Oxide retreats to his spaceship in space above Earth, shocked that the player defeated him, and stating that he'll be the laughing stock of all Gasmoxia. Despite abiding to the condition that he will leave Earth alone as a result of losing the race against the player, Oxide notes that the player hasn't gathered all of his Time Relics. Until they've collected all of the Time Relics and challenges Oxide once again to a rematch, Oxide states that they'll never claim that they're the fastest. Oxide concludes that it won't be the last time they'll face him, and that they'll meet again, leaving the Earth temporarily until their rematch.

After collecting all 18 of the Time Relics and defeating Oxide a second time, Oxide once again retreats to his spaceship in space above Earth, while screaming in defeat. Bitter that the player defeated him once again, Oxide states that he has to go back to the planet Gasmoxia a complete loser, while also noting that he's getting slower at his old age. Fed up with racing against Earth's racers, Oxide keeps his word, and angrily storms off from Earth, leaving the planet for good. Crash and Coco are seen in Coco Park, where they high-five and dance, celebrating Oxide's defeat. After finishing the dance, Crash burps out the butterfly he ate while sleeping, as seen in the intro. 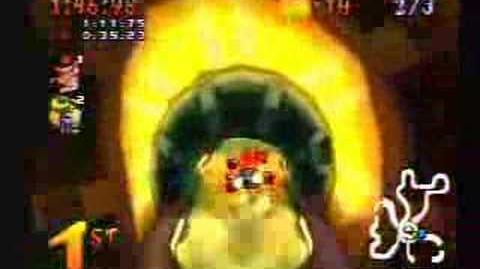 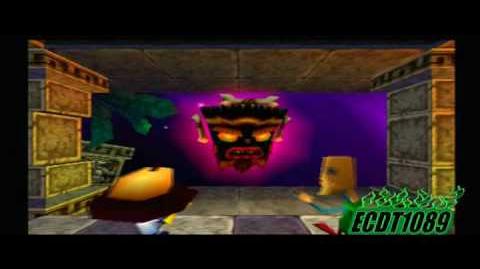