Bandipedia
Register
Don't have an account?
Sign In
Advertisement
in: Crash Bandicoot 4: It's About Time, Levels, Castle Levels, Mechanical Levels

Nitro Processing is the first story level of Cortex Island (1996) and the thirty-first main level of Crash Bandicoot 4: It's About Time.

After barely managing to stay on Cortex's airship, Crash and Coco follow him back to Cortex Island in 1996, but end up into the island's factory. Cortex communicates with his past self using his "super secret personal frequency", as the two bandicoots watch over, in an attempt to convince him(self) to abort the experiment which led to the creation of Crash. This comes to no avail as the past Cortex grows confused and distraught, believing the present Cortex to be an imposter before ordering N. Brio to alert the Lab Assistants in panic.

Following this, Crash and Coco must make their way through a massive manufacturing facility that appears to create the explosive substance stored within the unstable Nitro Crates. All the while, the protagonists are confronted by numerous rat henchmen, electric roaches and explosive green sludge creatures, all the while listening to the two Cortexes argue over the intercom.

Crash and Coco in their Crate Crusher 9000 skins. 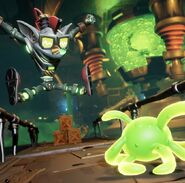 Crash in his Crate Crusher 9000 skin attacking a blob.