Nitro Court is the fourth battle arena in Crash Team Racing and Crash Team Racing Nitro-Fueled and is the battle arena in Citadel City. Like Skull Rock and Rampage Ruins, it reflects the theme of the hub in which it is set. The arena's shape is a perfect square, being symmetrical in every way except possibly for the location of the crates. The courtyard ground is a mix of tile and grass. In the Crystal Challenge, a crystal is hidden in almost every corner where two walls meet, which the player can also use to escape opponents in the Battle Mode. Castle walls surround all four sides of the arena, which is set during nighttime. The portal to the arena is in Citadel City, close to Oxide Station, but in its own alcove. 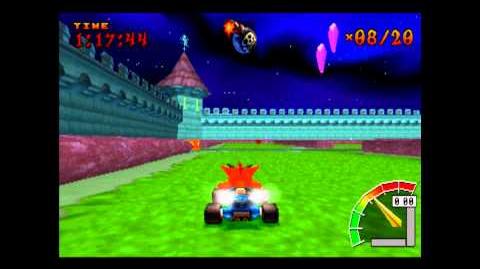