Certain energy bolts can be deflected back at him.

Cortex is the sixth and final boss of Crash Bandicoot and he has five hit points. Crash is on top of Cortex's airship, flying around Cortex Castle which is on fire. Cortex, on his hoverboard, flies over to Crash and says "Darn you, Crash Bandicoot!", then, using his blaster, starts blasting energy bolts. The bolts come in pink that homes in on Crash, blue that goes up, down, across the bottom and top, and green which Crash can spin back at Cortex. Don't try to jump at him as you'll go right through him.

On the first round, Cortex will fire two pinks and one green. Spin it back at him and it'll take a hit point from him.

On the second round, he'll fire a pink, a blue, another pink, two more blues, and two greens. Once you hit one of them, a large green energy bolt will be above Cortex. Spin another green into it and it'll land on Cortex. By this point he'll just have three hit points.

On the fouth round, this time he'll just use pink and green. He'll fire fast rows of pinks and a single green at the end, hit them twice to damage Cortex. Surprisingly, on his last hit point, Cortex will fire a single, pitiful green. Spin it a him and his hoverboard will blow up, and he'll plummet down onto his island. 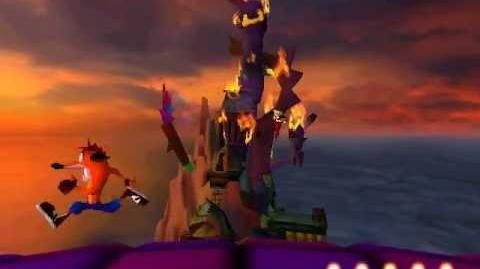 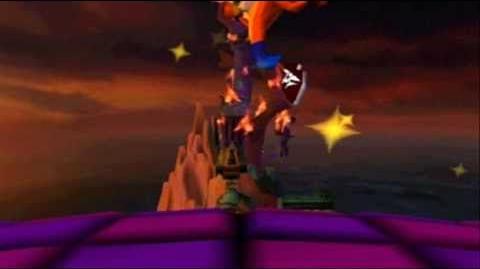 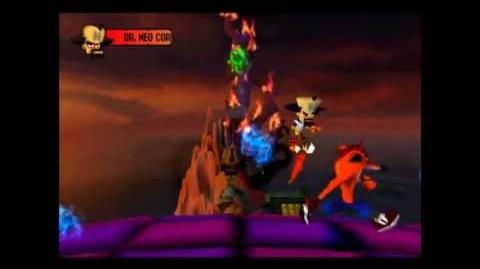 Damage his jetpack to keep him from escaping.

Cortex is the fifth and final boss in Crash Bandicoot 2: Cortex Strikes Back, and, with the exception of Dr. N. Gin, has three hit points as the rest of the bosses. This boss battle is held in space. Crash's goal is to defeat Cortex before he gets to the space station and blasts everyone on Earth with the Cortex Vortex, turning everyone into Cortex's mindless slaves. Crash uses a jet pack in the fight so he can keep up with Cortex. Crash has to watch that he does not bump into asteroids or mines, if he hit one of them, he will slow down. Cortex doesn't have any attacks, he will only run away and occasionally slow down for Crash to catch up to him. Once Crash spins Cortex three times, he'll go shooting down the space tube, going out to nowhere, and screams back "Nooooooooooo! You haven't seen the last of me, Crash Bandicoot!". If Cortex escapes then, followed by evil laughter, Crash will lose a life and will have to start the boss fight again. 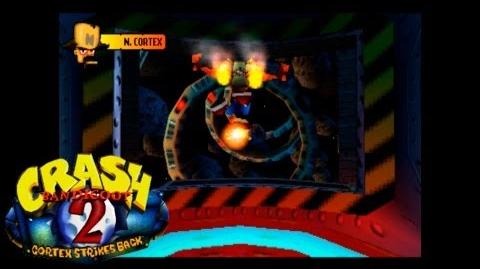 Sometimes his forcefield fizzles out.

N. Cortex (でたぞ ネオ・コルテックス lit. He Comes Out, Neo Cortex in Japanese) is the fifth and final boss for the third time, he has three hit points and Uka Uka fights alongside him. As soon as Crash arrives, Uka Uka goes onto Cortex's face (who's on his old hoverboard) and jumps up and down furiously saying "Crash Bandicoot, for the last time, give the crystals to me!" but takes care of Aku Aku first.

Unfortunately, Crash can't have an Aku Aku mask. Therefore, Crash will have to do a no damage run against Cortex. Cortex will be protected by a force-field but it will go down in a bit. Crash needs to keep his eye on the dueling masks who use lasers against each other that go the length of the room. He must also watch out for Cortex's red energy bolts (purple in the N Sane Trilogy remake) that he fires while dodging the lasers. After about three blasts, Cortex will throw five mines onto the ground, his shield will shut down, and the masks stop fighting, giving you the chance to spin him off his hoverboard when he's on the ground. Continue spinning him towards the shaft in the middle of the room. A noise is heard, one of his hit points disappears, and Uka Uka goes down to save him.

When they come back out, Uka Uka is even more mad and begin shooting flames, which aren't harmful to Crash and puts Cortex back on his hoverboard. While Cortex does the same thing as before, Uka Uka and Aku Aku turn into a tornado and spin around the room which can harm Crash on contact; repeat the same strategy like before to damage Cortex.

On the third round, they head for Crash, spinning faster and they make a big explosion. Repeat the same thing with Cortex. Once he goes down the shaft a final time, Crash wins and gets the Crash Dash power.

Hint: On the last round, the explosion from the masks could destroy Cortex's mines, giving you a clearer way to hit Cortex.

The boss battle is fought inside the Time Twister Machine. 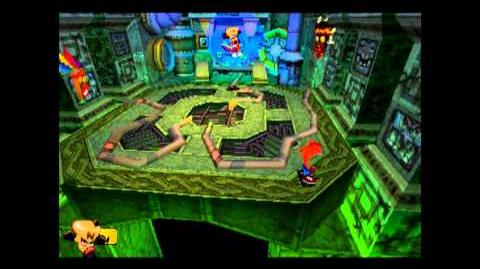 Cortex is the final boss and he has 4 hit points where he is fought along with Crunch and The Elementals, Cortex himself doesn't do much fighting as he just watches the battle (Crunch does most of the fighting), After Crash shoots Crunch with the bazooka Crunch will hop behind Cortex and hit him in the back of the head, sending him flying off the platform. Crash then needs to spin him before Uka Uka picks him up, repeat this three more times, and you beat the game. 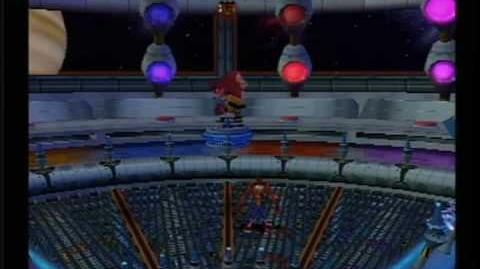 Cortex (ねらいを はずせ！ lit. Let the Aiming Miss! in Japanese) is the last boss in Crash Bandicoot: The Huge Adventure, and he has 3 hit points. 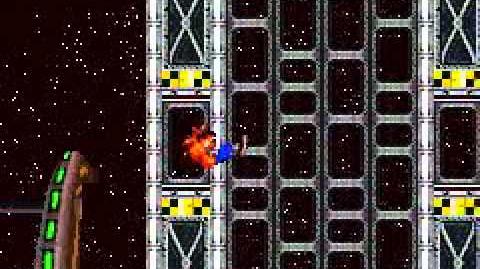 Cortex is the last boss and has two hit points. He will be in a spaceship with Ripto. They then reveal two giant arms on their spaceship; Crash must shoot off the arms. After both arms are destroyed under 1 minute, Crash wins. 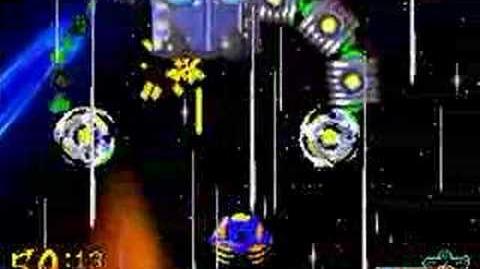 In Crash Twinsanity, this is the first time in the Crash history where Cortex is not the final boss of the game, rather the first boss. He has three hit points. The fight starts where Cortex hops on his rocketsled and starts shooting Crash with rapid fire of small green energy balls from his pistol. After all the blasts he shoots have been dodged, he charges a bigger blast. Spinning it will make the blast fly back at him, making him lose a hitpoint. The blast breaks his rocketsled and makes him fall onto the arena. Then, he teleports around the arena starts throwing bombs at Crash. While throwing bombs he says quotes mentioning characters "This is from Tiny, this is from Dingodile, Ripper Roo you shouldn't have, Pinstripe how thoughtful". Only Dingodile would appear later on in the game, appearing as a boss, while the other three only make a cameo appearance.

When a bomb hits a tile other that the central one, it will fall down, making less space to dodge the following blasts. He throws five bombs and makes three tiles fall. After shooting small blasts, he will shoot another big blast from his gun that Crash can spin back, blowing up his rocketsled and sending him flying to the ground again. He warps back on top of the arena, then he gets on another rocketsled. He throws more bombs, making remaining tiles fall, leaving only the central tile remaining. This time, there will be a target showing where Cortex will fire rapid fire energy balls, but it can be easily dodged. Then Cortex shoots his final blast. Returning it makes the fight with Cortex end but he calls N. Gin in the Mecha-Bandicoot to fight Crash. 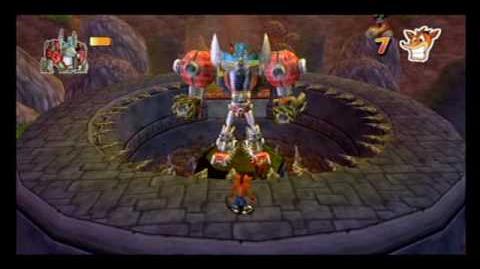 Cortex's boss fight is the first one. After Crash jacks Yuktopus, he needs to destroy all of the walls that are supporting the platforms that Cortex is standing on. When all three platforms are gone, you win the fight. 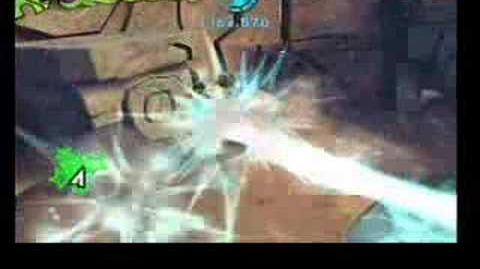 Cortex is the first boss and has ten hit points. Crash must hit him at least ten times. Once this is done, he wins. He, along with the previous bosses and other Titans, will battle Crash for a second time as the final boss. Use the same ways as before to defeat them. 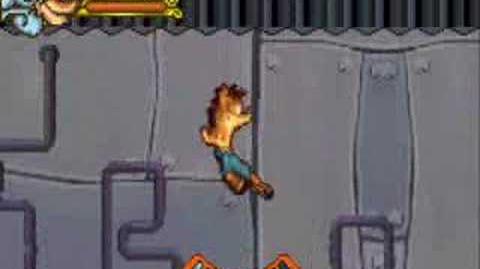 Cortex is the third and final boss of Crash: Mind Over Mutant. He has a large health bar rather than a specific number of hit points. Cortex will drink a potion, transforming him into a ferocious beast. Crash must jack Grimly to slow down time to hit Cortex without getting hit by his blasts (hit him 28 times). After this, Crash must fight him directly (hit him 8 times), so he can jack him. Cortex's attacks primary consist of spinning around and causing a pink whirlwind to appear around him all the while launch pink energy balls that bounces around the arena, Crash must then defeat some enemies until a giant spin switch appears, use Cortex's special move while standing on it, then use Cortex's jump attack onto a giant red button, which is the Space Head self-destruct. Pressing the button wins the fight. 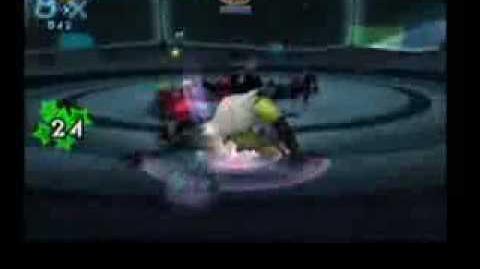 In the remake of the first three games all Cortex boss fights are the same as the original. 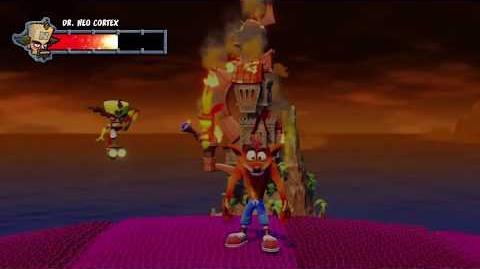 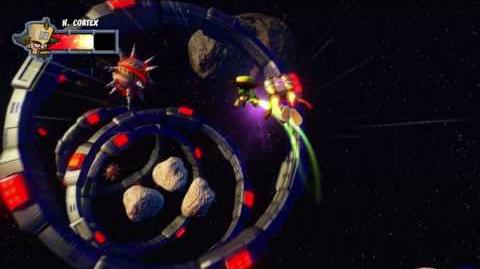 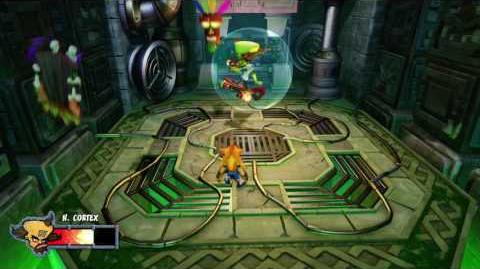 Main article: The Past Unmasked