The N. Tropy Clock is a race-exclusive weapon in Crash Team Racing and Crash Nitro Kart. It is a bronze stopwatch that cause all opponents on the track to spin out and suffer a few seconds of speed reduction. During this period, the victims cannot pick up new weapons from ? Crates, nor can they use whatever weapon they were holding at the time. In Crash Team Racing Nitro-Fueled, the latter aspect wears off sooner that the speed reduction itself, and the victims no longer lose Wumpa Fruit when hit. Juiced up N. Tropy Clocks make the speed reduction even longer. In CTR, it will not affect racers who are using an Aku Aku/Uka Uka Mask or Power Shield (though the latter will still disappear), but in Crash Nitro Kart, it will penetrate both of these.

"This wicked watch will let you alter time and slow down every other kart on the track. When you activate it, everyone else will spin out and time will slow down for them. You'll be protected from the time vortex and speed by the other racers as they crawl along. This is a great way to come from behind, so take advantage of it. This item is found only in race modes. Juiced - The time effect will last even longer." 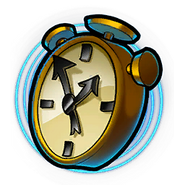