The fourth boss in Crash Bandicoot 2: N-Tranced is N. Trance. To enter this boss fight, Crash must have acquired all 21 crystals in the game. This boss fight has two stages. N. Trance has four hit-points in the first stage. In this stage, he extends his mechanical arm with a chain. Then he starts jumping and Crash must avoid colliding with him. Crash must then attack N. Trance. This is to be done four times.

The second stage is very different. In this stage, Crash uses his copter pack.  Crash needs to avoid N. Trance's attacks and then spin him over to an area in the bottom left corner, where Fake Crash will drop lava on N. Trance. N. Trance has five hit-points in the second stage. When defeated, he'll be fried. 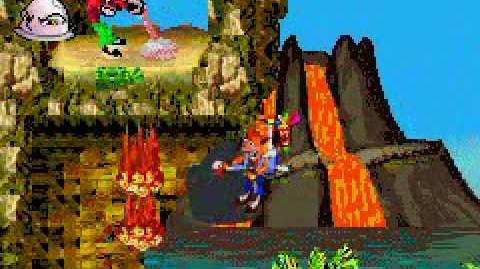 Stage 2.
Add a photo to this gallery
Retrieved from "https://crashbandicoot.fandom.com/wiki/N._Trance_(Boss_Fight)?oldid=112370"
Community content is available under CC-BY-SA unless otherwise noted.