Iceberg Lab
This article refers to the hub world for the game Crash Twinsanity. For the island itself, see N. Sanity Island.

N. Sanity Island is the first hub in Crash Twinsanity. It is also where the first cutscene occurs.

The N. Sanity Island hub is divided into 3 sections, acting as a buffer between levels. Section One is where the game begins, Section Two is reached after Cavern Catastrophe, and Section Three is the end of the hub after Tikimon's boss fight.

The beach has many features including palm trees, beach chairs, umbrellas, and rock columns. There are also an acorn, a soccer ball, and a beach ball to roll around. The beach has a water spout with fish falling from it constantly. Near this spout, to the left, are pillars to be jumped across that lead to a shortcut to section two once Cavern Catastrophe is completed. There is also a tiny nearby island which can be reached via a sled down a ramp. There is a hen house right next to a fenced area filled with Nitro Crates nearby the beginning. To the left of here, still on the beach, a row of tiki statues can be found, as well as a cannon to shoot them down. Opposite this is the entrance to Jungle Bungle.

After leaving the cave exit from Cavern Catastrophe, another beach area is revealed. A sharp turn to the right leads you to a shortcut back to section one. A few crate puzzles that yield gems can be found further down the beach, with some loose chickens scattered around nearby. A dock can be found here, which is where the boat arrives when returning from the Iceberg Lab. A worm that can be bounced on as a shortcut up to Farmer Ernest's farm appears here after Totem Hokum is completed. At the end of the beach is a ramp that leads up to Totem Hokum.

After the Tikimon boss fight, there is a sheer drop down a cliff to a small beach with a few tribesmen wandering around. There are platforms to the left that lead down the to the sand, as well as another small puzzle for a gem to the right. In the middle of the shore is a dock with the boat that takes Crash to the next hub, the Iceberg Lab.

Red gem: Dead ahead right after the game begins, there is a small fenced area filled with Nitro Crates with a henhouse right at the entrance. Herd the chickens into the Nitros to detonate them one by one, clearing a path to a raised rock formation with the red gem on top. Jump on the Bounce Crate to get to the top and collect the gem.

Clear gem: On the far side of the starting beach, there is a rock formation that can be climbed by bouncing on worms, bringing you to the top of a ramp with a sled on it. Jumping on the sled transports Crash to a tiny sand island with a tall rock formation on it. Use the worms to bounce to the top of the rock and collect the gem found up top.

Blue gem: Use the cannon opposite from the entrance to Jungle Bungle and fire it at each of the tiki heads shorten them and clear spikes from the top. Once they're all clear, jump across the tops of the tikis to make your way to the gem.

Green gem: Jump on a TNT next to a hay bale to blow up the nearby Nitros, bringing down a bounce crate. Jump on the bounce crate to reach the gem.

Yellow gem: Partially descend down the platforms after Tikimon's arena until you see a platform made of Basic Crates to the right. Jump along these crate platforms to reach a detonator crate at the end which activates the Nitros surrounding the gem on the sand below you. Jump down and grab the gem. 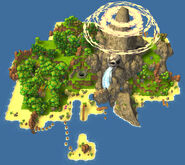 A map of the island. 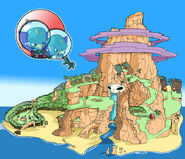 Concept art of the Evil Twins threatening the island.