N. Gin Labs is the 13th race course in Crash Team Racing and Crash Team Racing Nitro-Fueled. It is part of Citadel City and is based on the levels The Lab and Toxic Waste from Crash Bandicoot. The unlockable battle arena, Lab Basement, is very similar to this track. As its name suggests, it is Doctor N. Gin's home track.

It is featured in the Crash Cup (along with Polar Pass, Hot Air Skyway and Slide Coliseum) and in the Blue Gem Cup (with Sewer Speedway, Tiger Temple and Dragon Mines), where it is the final race course. It's also one of the first races available to race on in Citadel City, the other being Cortex Castle.

As the name suggests, this track takes place in N. Gin's laboratory, filled with nefarious machinery, robots and toxic waste.

The track begins with a brief straight before briefly cutting to the left before a sharp turn to the right. The road proceeds forward before a ramp with a boost pad on it helps racers cross a small gap, followed by a cut to the right before continuing to the left. Another boost pad ramp follows, with a sharp turn to the right soon after, leading to another boost pad ramp that launches racers over a later section of track. Over the gap is a curve to the left leading to a small room before entering the high-speed tunnel. This tunnel grants sacred fire throughout (blue flames in Nitro-Fueled) as it gently curves downwards to the right.

At the end of the tunnel, the rightward curve continues along a metal catwalk over a deep pool of toxic waste. After this is a small drop down onto a straight section of track, which has a stage hazard in the form of large rolling barrels which roll down the centre of the road to crush racers. After this, the track cuts to the left then right again before a sharp right-angled spiral to the left. At the end of the spiral is a sharp right turn leading to a massive drop down to the track below, with a small boost pad ramp in the centre. After dropping down, racers proceed along a straight sections filled with many holes before a sharp turn to the left over a bridge over more toxic waste. Next is a sharp uphill right-angle turn to the right, then another, bringing racer back to the finish line. 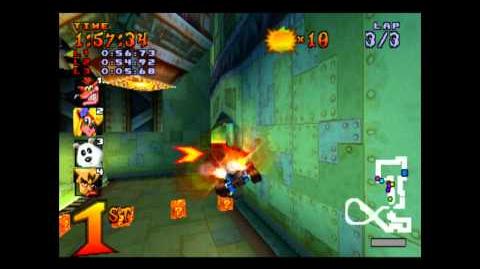 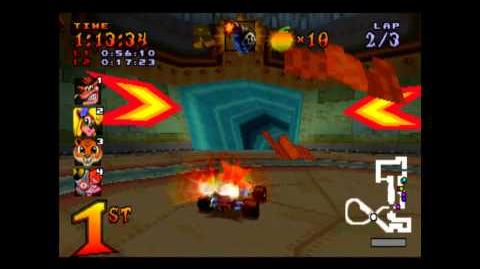 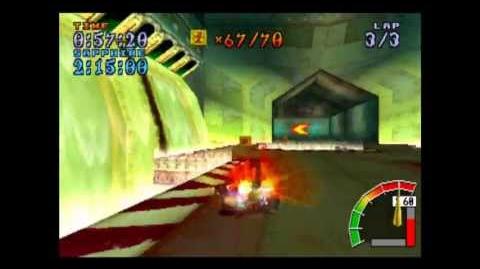