N. Gin is the fourth and penultimate boss of Crash Bandicoot 2: Cortex Strikes Back, and the only one who was working for Dr. Neo Cortex, he has five hit points. Crash is on three platforms. N. Gin will be seen controlling a flying mech as he enters the boss arena. He will then say "Like Dr. Cortex said, give the twenty crystals you've collected to me!", beginning the fight.

N. Gin has the greatest arsenal of attacks out of any boss in the game. In the first part of the battle, the mech can fire a red energy laser from one of its four-clawed hands that goes up and down; Crash must continually throw the Wumpa Fruit at the hands when they open up to damage the mech. Once the mech's hands are destroyed, N. Gin will have just three hit points.

This time, the mech will go down, pop up, and blast the platform Crash is on with a large green energy beam from the green circle core located in the middle of its stomach, making it fall; the beam itself can also damage Crash as well. The core itself will also be destroyed by Wumpa Fruit. The mech will blow up, sending N. Gin out into the vacuum of space shouting "Master Cortex will be very displeased with your resistance. Prepare to suffer his wrath!". 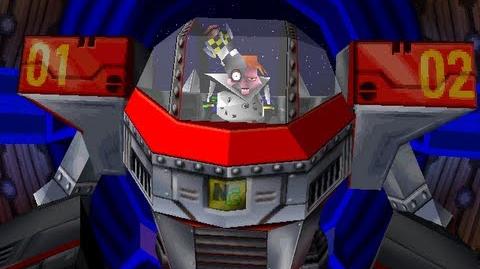 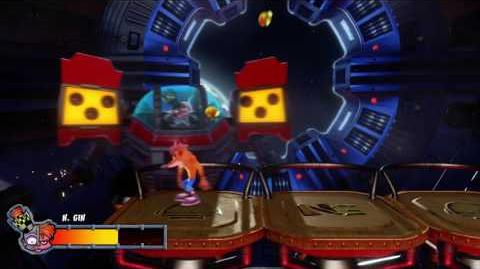 N. Gin (エヌ・ジンの おニューなマシン lit. N. Gin's New Machine in Japanese) is a two-part boss fight and is once again the fourth and penultimate of Crash Bandicoot: Warped. This time, it's Coco that faces him. N. Gin opens the fight by saying: "Prepare to be pulverized, bandicoot!". Coco will be piloting a pink spaceship and N. Gin will be controlling an upgraded version of his mech from the last game. For this boss fight, both Coco and N. Gin have a health bar; N. Gin once again has five hit points. He will fire missiles at Coco from the flaps on his shoulders; this is when the mech is vulnerable. The mech also carries a set of machine laser guns on both hands, which Coco must shoot at when they are deployed, as they will fire a barrage of red energy lasers. Coco must also shoot at the yellow circle core located on it's stomach, which fires much stronger missiles. As they can inflict considerable damage and can cut Coco's life bar down in seconds, it is recommended to take that out first.

Once he loses all five of his hit points, N. Gin will transform his mech into a jet-like vehicle and fly off-screen. Coco flies into outer space. N. Gin then becomes his second form, merging his current mech with a spaceship-like component. Pura, piloting his own ship, then connects to the back of Coco's spaceship, making her laser more powerful and beginning the battle. This time, N. Gin has seven hit points and has a new set of abilities. His attacks are two purple energy balls that he fires from the laser cannons located on both the left and right sides of his new mech. It is vulnerable when the cannons are open. The mech also has a large cannon underneath it that can launch a bomb. It takes multiple hits to be destroyed. The mech can also fire multiple missiles from the four missile launchers above, Coco must shoot lasers at them when they open. Once defeated, the mech will fall apart and blow up, sending N. Gin (with fire coming out the missile on his head) off-screen yelling "Aagh! Not again!". Coco will automatically collect the Bazooka power-up and proceed to the fifth and last warp chamber. 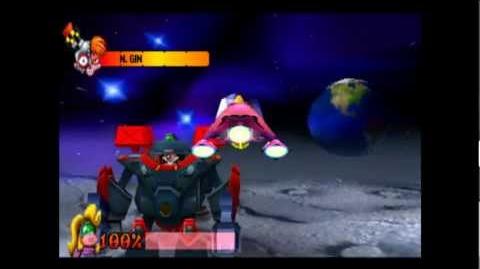 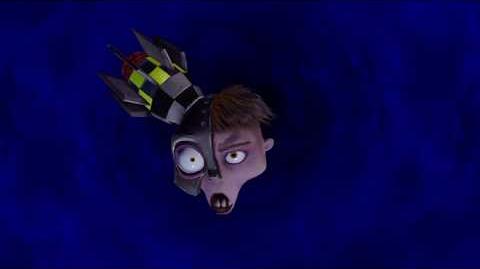 N. Gin (はっしゃこうを ねらえ！ lit. Aim at the Firing Ports! in Japanese) has a new machine in this game. It is a spaceship-like mech that is similar to the one he used in Warped, but a bit smaller. Crash fights him while wearing a Jet Pack and has to shoot at the mech's laser located on the sides and a cannon from underneath in the air with a built in gun on his jet pack and dodge the missiles N. Gin fires at him. When defeated, the mech falls out of the sky. N. Gin has a total of four hit points in this game. 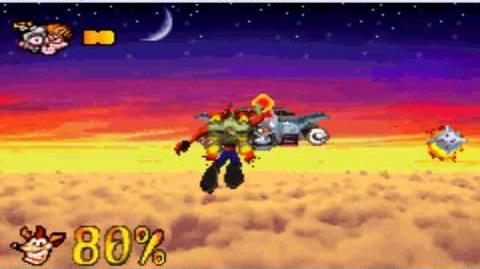 N. Gin is the fifth boss in the game, featured midway through the level High Seas Hi-Jinks; however, it is considered a mini-boss in the game as his hit points are not shown unlike the other bosses. In this boss battle, N. Gin stands on a platform in the center of his crow's nest and fires missiles at Crash in quick succession from a cannon. He will then throw a TNT crate at Crash. If Crash stands by one of the crow's nest's leg supports, and the TNT lands and explodes near the support, it will be blown away. The boss concludes once all three leg supports have been broken. N. Gin and the crow's nest will fall, and Crash will fall shortly after into Rusty Walrus's kitchen. The Rusty Walrus chase and the N. Tropy and N. Brio battle then follow. 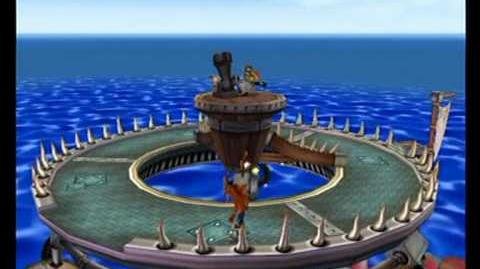 N. Gin is the third boss and has four hit points. He will be playing his organ and sending titans to attack Crash. Crash must hit three targets close to the ground with Ratcicle or Sludge, then jack Snipe or Sludge to hit the target above the doorway. 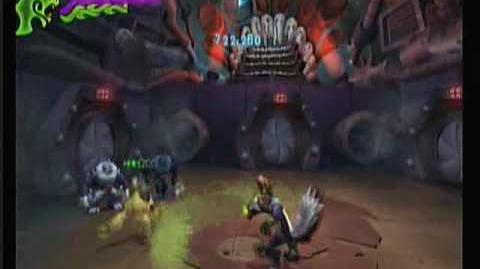