N. Gin's Mech is the mech that Doctor N. Gin naturally uses to destroy Crash and all who oppose him.

This first mech is a suit of armor-like ship. On the top there are red boxes on the "shoulders" marked with 01 & 02. These are flaps for concealing missiles that shoot out from the shoulders that,t usually in the boss fight, shoot two at a time, but end up as one. The "hands" have flaps to conceal lasers that mostly go with an up and down pattern, meaning that Crash needs to jump and duck at this instance.

The most powerful weapon is the "belly button laser" which actually destroy platforms that Crash stands on in the fight. The cockpit has no seat whatsoever, meaning that when riding this, the pilot needs to stand up. In the boss, some lights in the mech are visible, these are possibly controls for the mech. Crash destroyed this mech using Wumpa Fruit to hit the weapons.

This mech resembles a suit of armor, or a large robot, with a bubble-shaped cockpit. There is a large vent on the torso which opens up to reveal a deadly laser. N. Gin actually has a license plate on this robot, marked with NG. Also note that there are two tiny laser-like objects on the bottom. The mech also seems to be motion controlled; for example, in the intro of the boss fight, the mech's arm moves as N. Gin's arm moves.

This one is much larger than the previous one and has more resemblance to a robot than the previous one. This one now has hands and feet. The hands hold machine gun-like weapons and the feet seem to have boosters on the bottom. Since this is a new mech, the pilot no longer has to stand up anymore. On the top of it there seems to be a scoping view to overlook any enemies coming up from behind. There are red boxes again, but this time, they are marked with X instead of 01 & 02. The belly button now shoots rockets instead of a large laser. If this mech fails, it can transform into a more powerful one. This one resembles a large spaceship, with a much larger cockpit and a viewable command station. Instead of having two red boxes, this time there are four. The sides of the mech have powerful laser and a bottom laser that shoots golden projectiles. In this model, the same two tiny laser-like objects are viewable, but without the little green balls at the ends.

This mech resembles a large robot, and has many weapons. This mech has five fingers unlike the characters in the game. The hands hold an 8-round machine gun, and the scope-view item on the top has a green view screen in order to look around. The red boxes are now being held up by little red supports. The torso seems to be two gray disks attached to two blue wires. Near the belly button laser are markings resembling part of a gauge. The boosters on the feet seem to create blue fire for boosters.

This mech resembles a spaceship and has more weapons than the previous one. The transformation apparently makes the cockpit a lot bigger; it is actually so big, you can see the control station. Four vents are on the front of the vehicle, probably needed for the transformation due to the heat it would probably be causing. The hands are now large lasers that shoot balls of energy.

This is a much simpler mech, armed with one X rocket launcher, and three missile shooters. It now has a really small cockpit bubble with nothing in it.

Since this is a much smaller mech, there are fewer weapons, them being an X rocket-launcher and three missile launchers; two on the sides and one on the bottom. This mech is gray and has four vents, resembling the second model of the previous mech. Over the rocket launchers on the sides are wing-looking objects.

N. Gin's first and second mechs reappear in the Crash Bandicoot N. Sane Trilogy remaster of the second and third games, respectively, reprising their roles from the original versions of those games.

Both of N. Gin's mechs from the second and third game appear in the remastered N. Gin Labs track. They appear after the long tunnel with Lab Assistants working on them.

The second form of N. Gin's first mech from the N. Sane Trilogy. 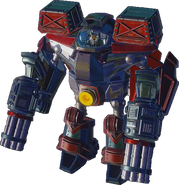 The first form of N. Gin's second mech from the N. Sane Trilogy.

The second form of N. Gin's second mech from the N. Sane Trilogy.

Concept art of the mech from Warped.
Add a photo to this gallery

Retrieved from "https://crashbandicoot.fandom.com/wiki/N._Gin%27s_Mech?oldid=192162"
Community content is available under CC-BY-SA unless otherwise noted.