Mystery Caves is a race course in Crash Team Racing and Crash Team Racing Nitro-Fueled. It is raced on in the Nitro Cup (as well as Papu's Pyramid, Cortex Castle, and Tiny Arena) and the Red Gem Cup (along with Crash Cove, Papu's Pyramid and Blizzard Bluff). It is the third race course of the game. In Adventure Mode, the track is located in N. Sanity Beach, across from Ripper Roo's boss garage.

The track takes place within an underground cavern, full of stalagmites, stalactites, underground streams, mysterious tiki heads and pools of lava, dinosaurs were also added in the Nitro-Fueled rendition of the track, a reference on how the temple was built in prehistoric times.

The track starts on a brief straight section before veering off to the right, with two boost pads on the turn. At the end of the turn is a stream with two turtles sitting on either side (pterodactyls only appear in the final lap), alternating between sitting up and laying down. When a turtle is sitting up, it can be used as a ramp to avoid losing speed in the water.

After the turtles is a gentle curve to the left - or, alternatively, a rocky shortcut more sharply to the left to cut the corner. After this is a relatively straight section with a few bumps, with another set of turtles at the end before turning right into a downhill decent, with a boost pad on the left. Next the track briefly forks into two paths, before reforming into one.

Next up is a gentle curve to the left with three ramps along the way that bounce you over lava streams, with fireballs hopping in and out of the lava in your way. After the ramps is an uphill turn to the right, leading back into the underground stream section. There are two more sets of turtles right after this before a turn to the left. After a brief straight section is another turn to the right before going back to the left, meeting a final set of turtles before turning left again to get back to the finish line. 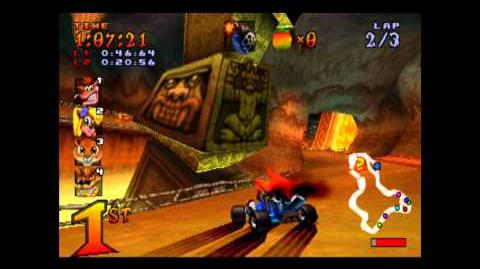 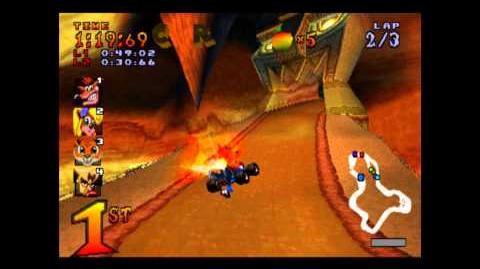 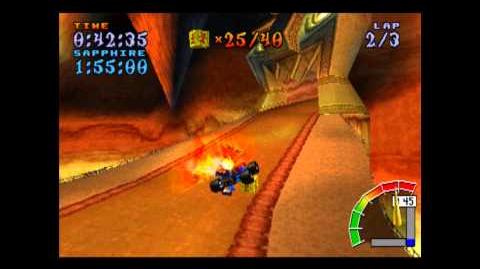