Shaking to death
Crushing with sarcophagus

The Mummy(Japanese: ツッタカ・カーメン、ミイラ研究員） is a variety of lab assistant found in Crash Bandicoot: Warped, Crash Bandicoot 2: N-Tranced, and the Crash Bandicoot N. Sane Trilogy remaster of the third game. The mummy can found in two different forms: the sarcophagus mummy and the spiked mummy, both found in ancient Egyptian themed levels in the two games.

Both of the actual mummies are similar in design: they have a lab assistant frame (presumably a robotic one as seen in the hidden warp room in Crash Bandicoot: Warped) covered in bandages, with the signature glasses on the outside of the cloth, however, in their respective casings, the mummies are very different.

On the sarcophagus is a pharaoh image of the mummy inside, all painted with elaborate colors similar to actual sarcophaguses, which utilize bright colors to celebrate the afterlife for the body inside. The most prominent feature of the coffin is the death mask of the lab assistant. The death mask allows for the soul to find the body after death in ancient Egypt, mirroring the control Cortex has over his lab assistants throughout the series. The sarcophagus also contains elaborate collars, used in ancient Egypt to show how important the person was inside. On the mummy in the game however, it is only used for elaboration on the design of the coffin.

The spiked mummy has a similar appearance to the sarcophagus mummy without his coffin. However, the spiked mummy only has half of a coffin with large, spiked tips protruding from it in all directions, making it impossible to spin or slide into. The spiked coffin has strips of illegible hieroglyphics, probably only for design.

Both varieties of mummy don't actually attack Crash but instead hop around a given area, blocking Crash's path. When the sarcophagus mummy is broken out, it will attack Crash slowly, holding its arms out and moaning. When it reaches Crash, it will kill Crash on impact. The spiked mummy, when physically embraced, will 'pop' Crash, sending him spiraling to the ground. The sarcophagus mummy's coffin will fall on Crash, completely crushing him.

A Sarcophagus Mummy Lab Assistant in a Grave in Crash Bandicoot: Warped.

Crash about to confront a Sarcophagus Mummy.

The Sarcophagus Mummy without his coffin. 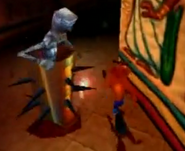 The Spiked Mummy in Bug Lite.

A Sarcophagus Mummy Lab Assistant in the N. Sane Trilogy.

The concept art of the Mummy enemy.
Add a photo to this gallery

Retrieved from "https://crashbandicoot.fandom.com/wiki/Mummy?oldid=190233"
Community content is available under CC-BY-SA unless otherwise noted.