Crash: Mind Over Mutant
Mount Grimly is a location in Crash: Mind Over Mutant, situated on an island north of the Junkyard. Grimlies, the mountain's namesake, make their home here, among a number of other titans serving Dr. Cortex. Crash travels here in order to save the captive Uka Uka, whose bad mojo is being drained to power NVs.

Mount Grimly lies in the middle of the sea, and is connected to the Junkyard only by a series of narrow land bridges. Two gates to the northwest bar further exploration: the buttons to deactivate them are in a hollow cave with lava and a chain-link wheel on the inside. Running along the walls of the cave causes them to spin, revealing one button on either side. The path that opens is permanently under a strong west-blowing wind. Doom Monkeys, Znus, blue crystals, and large tombstones alike can be destroyed for mojo. The mountain itself is shaped like three Grimly heads, complete with a stone "hand" that appears to move on its own. One of their "mouths" forms the mountain's entrance.

The inside of the mountain is dark and cavernous, with stalagmites abound and steep drops into a murky abyss. Upon entering for the first time, Crash is immediately ambushed by a group of Battlers. Further on, there are two sets of climbable walls: one leading down to a pool of water, and one leading up, deeper into the mountain. When Crash reaches the top, a shadow appears on the floor, and he encounters Grimly for the first time. Grimly can use its powers to slow down time, allowing Crash to safely cross a series of quickly-rotating platforms and a gutter where stone boulders roll down.

The following four chambers are all quite small, consisting mainly of obstacles for Grimly to use its power on. The first begins with a bridge where a light casts a great shadow as Crash passes. Two mechanical hammers, shaped like Grimly heads, crush anything underneath them, dealing slight damage. The next one contains platforms separated by chasms. Fragments of stone fall from the ceiling in perpetuity, acting as a bridge to cross. The path at the end branches off in two directions. The right path leads to a cliff face with crystal platforms for TK to pull. The left path leads to the third chamber, which contains axes swinging from the ceiling and platforms that flip up and down. The fourth chamber is accessed through a hole in the wall, and has rotating and collapsing platforms. 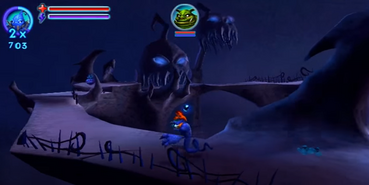 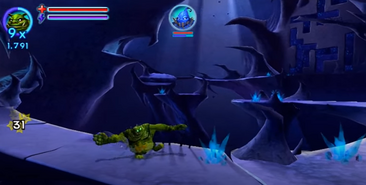 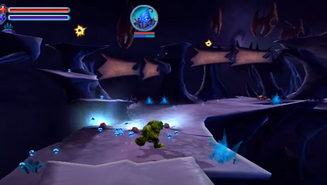 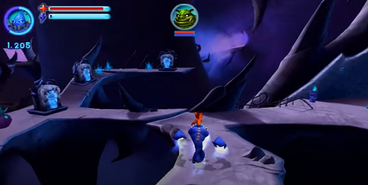 The next chamber is shrouded by a thick purple haze, so it is recommended that Crash traverse this section on foot to keep from falling into the abyss. Few enemies exist here anyway, besides the occasional Znu or Minebot. Mojo lights the paths that he can take, though there are many dead-ends, twists and diversions to mislead him. His true destination is past a rapidly spinning barbed wheel with an arena behind it; Crash must defeat two Battlers (accompanied by Grimlies and Slap-Es if returning) before he can progress.

The next room has a co-op puzzle and more rotating platforms. It is nondescript save for the fact that it is the final part of Mount Grimly before the boss fight.

Crash finally arrives at the boss arena, where Yuktopus, Grimlies, and Znus oversee the mojo-milking machine. To win, Crash must jack Yuktopus and use its Mojo Blaster attack to destroy the four mojo collectors on the downstairs floor. Doing so frees Uka Uka, who orders Crash and Aku Aku to retrieve his three voodoo bones from the Titan Heroes and restore his power. In exchange, he opens up two-way portals all across Wumpa Island and promises to help them find Dr. Cortex. Once Crash returns with the bones, a one-way portal to the Wumpa Island mainland (by Crunch's minigame arena) appears. Otherwise, he may carry on to the exit.

Inside a cave, a large red button exists that only Yuktopus is heavy enough to press. (If Crash somehow lost Yuktopus, a new, non-hostile one will spawn in.) It opens a gate that leads to the cliffside of Mount Grimly. Beyond a climbable wall is a cobweb-lined tunnel, which opens back out to the beginning of the level. Stenches and Slap-Es inexplicably drop from the ceiling and attack. Once they are defeated, a new section of the room is shown, granting access to three new portals: one to Wumpa Island, one to the Wasteland, and one to the Frozen Coast.

Concept Art from the Midway Pack.

Mount Grimly as seen from the Junkyard.

The cliffside of Mount Grimly. 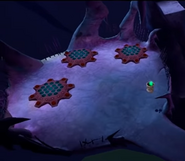