Monkeys first debut in the original Crash Bandicoot game as enemies in The Great Gate, Native Fortress and Up the Creek. They will attack by rolling back and forth on a set path. After they are done rolling, they will pause for a brief moment before rolling back into the opposite direction. Crash can easily defeat them by spinning into them during their idle animation. While the monkeys are rolling, however, Crash must avoid spinning into them or else he will be sent into the opposite direction, and possibly knocked off his path.

Monkeys return as enemies in Cortex Strikes Back. They can be found in levels like Road to Ruin and Ruination. In this game, they retain their appearance as the ones from the original game. However, they have a more cyborg like appearance this time around. They also attack differently, by jumping back and forth along Crash's path, sometimes jumping over gaps or TNT Crates. Crash can defeat them by jumping or spinning them away. However, they will be more tricky to defeat since they will be jumping around a lot.

In Crash Bandicoot 3: Warped, monkeys appears as another common enemy again in the game. They first appear in the level Hang'em High and continue to appear in the other Arabian-themed levels, where they can be seen trying to balance a set of 3 jars. The pile of jars will make it hard for Crash to jump over, so he first must spin or slide the monkey in order to get rid of the jars. Once Crash attacks the monkey for the first time, one jar will fall on the monkey's head, causing it to move around blindly. To dispatch of the monkey fully, Crash must attack it a second time. If Crash slides the monkeys, they will be defeated in one hit.

Monkeys also appear in the Egyptian-themed levels, where they hide in large jars and throw projectiles that explode and paint Crash grey. Crash can dispatch them by breaking the jars they are hiding in. Once he breaks the last jar, the monkey will cower in fear and act harmless towards Crash. He can jump on the helpless monkey and earn additional Wumpa Fruits.

Monkeys reappear in Wrath of Cortex, in the level Crash and Burn, where they are in clothes similar to Tribesmen. Their main offense is using a banana as a club.

Monkeys only appear in the first level in Crash Twinsanity, throwing Wumpa Fruit at Crash, but they do not intentionally harm Crash and they can be collected, while one shook a tree to get Wumpa Fruit down, the other two would pick them up and throw them. They act as the second rarest enemy in the game, the first is N. Gin's henchmen who are the rarest enemy in the game, and the series. They are colored blue and there are three in the entire game. When they run out of Wumpa Fruit, they will stand on the ground confused. But there is an Acorn Crash can roll into a hole to make another Wumpa Tree.

Monkeys appear in Arabian levels of Crash Bandicoot 2: N-Tranced, and they have the same design and behavior as monkeys from Arabian levels in Warped. This time however, to defeat them the player needs to attack them only once.

Monkeys also appear in volcano levels, and they have the same design and behavior as the monkeys from The Wrath of Cortex. If they notice crash they try to hit him with their banana. They can be defeated with a spin attack or a slide attack.

Monkeys lastly make an appearance in the N. Sane Trilogy, where they reprise their roles from the first three games. The potted ones now have a brown skin instead of beige, and have an angry expression.

﻿Monkeys appear in Crash Tag Team Racing as weapons with dynamite strapped to their backs, they land on cars to blow them up. A Dynamite Monkey also appears in the Die-O-Rama Monkey Business, where it blows up Crash. These also appear in a Mini-Game, where Crash must shoot them before they fall on a Park Drone, and blow him up.

Monkeys once again appear in Crash Bandicoot: Mutant Island throwing rocks at Crash from ledges. They can also be defeated.

A monkey in CMI.

A monkey just hit by Crash.

A cyborg monkey from Crash Bandicoot 2: Cortex Strikes Back.

A cyborg monkey from Cortex Strikes Back.

A monkey carrying a set of jars in the level High Time.

The Monkey from Crash Bandicoot: The Wrath of Cortex.

A monkey carrying a set of jars in Crash Bandicoot 2: N-Tranced.

Concept art of a monkey in Crash Twinsanity.

A rolling monkey from the Crash Bandicoot N. Sane Trilogy.

A monkey carrying a set of jars in the N. Sane Trilogy. 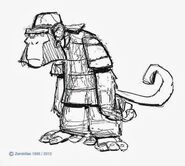 Retrieved from "https://crashbandicoot.fandom.com/wiki/Monkey?oldid=182857"
Community content is available under CC-BY-SA unless otherwise noted.