Come in and play a game! You can win trading cards or even more Wumpa Fruit.

Moneybags is a character originally from the Spyro the Dragon series, only appearing in the Crash series in the crossover title, Crash Bandicoot Purple: Ripto's Rampage.

In Purple, Moneybags runs the Spinning Wheel Shop, being the game's main method of obtaining trading cards. He plays a similar role that he does in his native series, requiring the player pay him for his important items or services, though it's to a much smaller extent, with the trading cards being merely optional collectables not necessary for progression.

Moneybags is greedy, money-grubbing upper-class bear who frequently gates Spyro's progression in his adventures for his own profit. He is a deceitful conman, forcing Spyro to pay massive fees in gems in return for things such as teaching him a skill, opening a pathway or releasing imprisoned allies. In Purple he seems a little more benevolent, simply running a business selling trading cards, though true to his name, he's still obsessed with money.

Moneybags is a large brown bear, usually seen wearing a black tuxedo with a cravat, dress shoes and a monocle, also almost always carrying a white sack of gems. In Purple, his attire changes depending on the level he's in. In Wumpa Jungle and Fire Mountains, he is shirtless, wearing only a grass skirt, a shell necklace and his usual monocle. In Arctic Cliffs, he wears a purple winter coat with his cravat sticking out of it, a furry hood, black winter boots and his monocle. In Dragon Castles and Tech Park his appearance resembles that of in Spyro: A Hero's Tail, with a purple vest over a white shirt, baggy purple pants with a stripy green belt and red shoes. He still has his monocle, and forgoes Hero's Tail Moneybags' fez.

The Spyro Wiki's page on Moneybags. 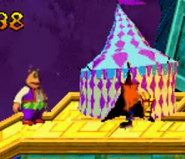 Moneybags' Trading Card from Orange.
Add a photo to this gallery
Retrieved from "https://crashbandicoot.fandom.com/wiki/Moneybags?oldid=193850"
Community content is available under CC-BY-SA unless otherwise noted.