Missiles are a type of explosive weapon that is used in nearly every Crash game, mainly by N. Gin, and as a weapon in the racing titles.

In Gone Tomorrow, there are robots that fire missiles when Crash gets close.

In Crash Team Racing, missiles are used as weapons, and will track down the nearest target in front of the user and blow up when it touches them. It will not target anyone who is using the Invisibility power-up. If the user is Juiced Up, it will be faster and more accurate.

In Crash Bash, they are used in Pogo Pandemonium and Crash Dash mini-games to make other players dizzy for a short time, and are weapons in Tank Wars. Also, eight-way missiles are found in Drain Bash, which is a Crate Crush mini-game. They appear in all bossfights except Papu Pummel. Missiles are used against the bosses in Bearminator and Big Bad Fox, and against the player in Oxide Ride. Ripper Roo will also fire the occasional series of missiles in the minigame El Pogo Loco .

In Crash Bandicoot: The Huge Adventure, N. Gin shoots them from his Mech, similar to Cortex Strikes Back.

Crash Nitro Kart also uses missiles for weapons with the same effect as seen in Crash Team Racing. A red-eye missile is also introduced as a Battle Mode exclusive weapon. It will transform the user into a giant missile that the player can steer towards others, exploding on impact and knocking over anyone in the blast radius. If the player is Juiced Up, it has better handling.

Various missiles are seen at N. Gin's battleship in Crash Twinsanity and they are used by Mecha Bandicoot and N. Gin in their boss fights. Some of the penguins in the game have rockets strapped to their backs and try to charge into Crash. Mecha Bandicoot's missiles are later reused a final time by Crash against the Evil Twins .

Crash Tag Team Racing introduces a new missile, the shark missile, which will destroy the targeted car completely when it hits. It will follow the direction of the track and can be fired at racers which are not directly visible, but may fail to hit the target if the target is too far away or something else (like another racer) gets in the way.

In Crash of the Titans missiles can be seen shooting out of N. Gin's Weapons Factory onto the beach. Penguins can also be seen strapped to missiles in Shock and Awesome.

"Normal - This super accurate tracking missile is a real blast! Fire off one of these puppies, and it will lock on to the closest driver in front of you. If it hits, it sends the enemy kart into a helpless tumbling crash. When you are being tracked by one of these buggers, a cross-hair appears on the back of your kart as the missile hunts you down. Juiced Up - Now the missile moves faster and tracks even better! NOTE: Sometimes you get three of these missiles at a time."

"These lock onto the nearest opponent you can see and zoom after him. They'll explode on contact and send your target into a killer tumble. If you see a set of crosshairs on your character, it means you've been targeted, so start dodging! Juiced - The missile goes faster and tracks better."

A Missile from Crash Bandicoot 2: Cortex Strikes Back.

One of Nitros Oxide's Missiles from Crash Bash. 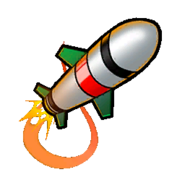